Pilgrims flock to Way of St.James during Holy Year 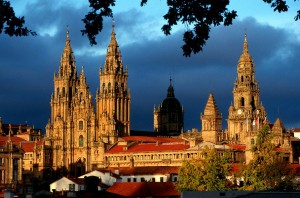 They come from around the world to have time to think, fulfil a promise or have an adventure: the gruelling “Camino de Santiago” has seen an influx of pilgrims this year, a Holy Year, for a variety of reasons.

Joshua Fleming, a 20-year-old Austrian student, said he decided to make the pilgrimage to Santiago de Compostela in northwest Spain after reading best-selling Brazilian author Paulo Coelho’s book describing his own pilgrimage in 1986.

“The challenge has opened my spirit,” he said at the town of Pedrouzo at the start of the last leg of his pilgrimage, after having already walked some 300 kilometres (185 miles) across northern Spain.

The complete “Camino” or “Way of St.James” pilgrimage route usually begins in the Pyrenees mountain range on the Spanish-French border and ends some 800 kilometres further west at Santiago’s cathedral which the faithful believe holds the remains of St. James, one of Jesus’ 12 Apostles.

The cathedral, considered the third most holy place in the Roman Catholic world after Jerusalem and Rome, has been a magnet for pilgrims since the Middle Ages.

But their numbers soar whenever July 25, the name day of St.James, falls on a Sunday as it does this year.

Last month alone over 33,000 pilgrims flocked to Santiago, compared to just under 20,000 during the same month last year, according to the archdiocese of Santiago de Compostela.

It estimates the number of pilgrims arriving in the city this year will be similar to the last Holy Year in 2004 when 180,000 people made the journey. The next Holy Year falls in 2021.

Visitors this year will include Pope Benedict XVI who is scheduled to stop over in the city during a visit to Spain in early November.

Claude Champagnon, 64, and her daughter Karine, 44, from Puy-en-Velay in central France, walked the “Camino” in 2003 and are repeating it this year because it is Holy Year, when those who make the pilgrimage believe they are granted remission for their sins.

But they are unhappy to face competition for beds at the budget hostels along the route from those “who are on the ‘Camino’ without religious reasons”.

That is the case of Jorge, Nicolas and Nacho, three 18-year-olds from Madrid, who admit they are walking part of the “Camino” to “have fun and party” by stopping in at bars and nightclubs en route.

Just over half, 55 percent, of the pilgrims who arrived in Santiago last month said they made the trip for religious reasons, five percent said they did it for cultural reasons and the rest said they were motivated by both, according to the archdiocese of Santiago.

“We prepared our trip without knowing that it was a Holy Year, but that makes it even more special,” said Sonja Hahn, a 42–year-old from Germany as she waited in line for a bed at a hostel at Pedrouzo.

Her partner Klaus Becker, 56, does not share her religous motivations but is nonetheless carrying a picture of a friend who died two weeks ago in his backpack.

“It is like she is coming with me,” he said.

Many who make the journey still wear the traditional garb of cape, long staff and carling felt cap adorned with scallop shells, the symbol of the saint which can be found all over the city.

In the Middle Ages pilgrims used to burn their worn out clothes after ending their journey at Cape Finistere, about 100 kilometres west of Santiago, which was then considered to be the end of the world.

Some still keep up this tradition. Cesar Machado, a 46-year-old diver from Lisbon, said he was picking up plants along the way which he plans to burn along with his clothes when he finishes his pilgrimage by bicycle.

“It is the philosophy of being reborn from the ashes,” he said, adding he was carrying candles from friends who are ill to light at Santiago’s cathedral.

“I am fulfilling a promise that I made four years ago, it is a spiritual issue and also a search for adventure.”

Pilgrims who have travelled at least 100 kilometres on foot or 200 kilometres by bicycle or on horseback can obtain the “compostela”, the Latin certificate confirming they have completed a pilgrimage to the cathedral, as long as they collect stamps from hostels or churches along the way as proof.

Yoonjung Jang, a 27-year-old statistics student from South Korea, said she decided to walk the “camino” after breaking up with her boyfriend in order to “forget everything”.

“Nothing has changed, but it is a very good experience”, she said.

1 comment on “Pilgrims flock to Way of St.James during Holy Year”