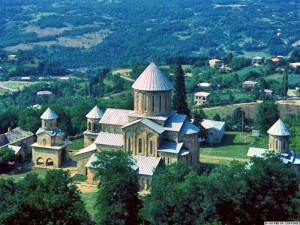 The Bagrati Cathedral and Gelati Monastery, two jewels of medieval Georgian architecture, are under threat.

That’s according to the United Nations Educational, Scientific, and Cultural Organization (UNESCO), whose World Heritage Committee is holding its annual session this week in Brazil. The committee maintains a catalog of nearly 900 natural and cultural sites of “outstanding universal value,” all of which must maintain strict standards of preservation to retain UNESCO assistance and funding.

In a July 29 statement, the committee expressed “serious concerns” about the state of the two Georgian sites, which were first added to the World Heritage List in 1994. It pointed to “irreversible interventions carried out on the site as part of a major reconstruction project,” leading to the placement of the cathedral and monastery on UNESCO’s List of World Heritage in Danger.

In January 2008, Georgian President Mikheil Saakashvili and the Georgian Orthodox Church had initiated a plan, involving structural modifications, to restore the initial religious use of the cathedral and monastery. The project went against previous UNESCO recommendations that leaving the site as a ruin would better maintain its authenticity. Today, the committee called for an immediate halt to the project.

The Bagrati Cathedral, named after Bagrat III, the first king of united Georgia, dates to the late 10th century. The painting-lined Gelati Monastery, whose main buildings date from the 12th to the 17th centuries, was a center of cultural and intellectual life in medieval Georgia. They now join the historic churches of Mtskheta as Georgian sites on the list of threatened sites.