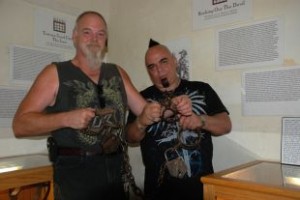 A dark side of humanity and penal history is on exhibit for public viewing throughout the month of August at the Historical Cornwall Jail.

Medieval Torture: Dark Deeds in the Dark Ages is a collection of torture devices from the dark ages on loan from collector and medieval torture expert, Steve Santini, who wants to educate people about history with his collection rather that repulse. “Those who don’t learn from the past are condemned to repeat it,” quotes Santini, who is hoping to create awareness regarding a still-controversial and much-debated subject.

“Even today in super-max prisons you have these guys in their cells for 23 and a half hours a day that’s torture,” says Santini, who advocates against it. “We have water boarding, and the States use electric shock.”

The collection, approximately 30 pieces of which are on exhibit at the Historic Cornwall Jail include thumb screws, shackles, and axes used in beheadings. “They all come out of Europe,” explains Santini who attends auctions while overseas and tracks down descendants of castle owners or others involved its history.

“Although they have a terrible history they are quite valuable because they don’t show up often. Not just because they are distasteful, because they are rare,” explains Santini, “Quite a few of them were destroyed in the wars for scrap medal drives, so to find these things is quite remarkable.”

In total, Santini, boasts the largest collection of these pieces in North America —approximately 150—which are on loan to other museums, including 60 pieces on long term loan at the National Museum of Crime and Punishment in Washington DC where John Walsh does America’s Most Wanted.

Santini, also an escape artist, has a history with the Cornwall Jail, having performed on three other occasions including a Guinness World Record set last year by escaping from a pair of police handcuffs in seven seconds.

It all began with a book report on Houdini when he was a kid in school, explains Santini, who then started experimenting on his own. “My parents would get phone calls, ‘You’re kid’s wrapped up in my kid’s bike chains jumping in our pool,’” he laughs. When he turned 15 he says that went to apprentice with a locksmith and by 18, was a master locksmith.

Santini is now in negotiations with the History Channel for a reality show called “Locked in the Past” where he would travel the world taking on these historic prisons and castles. “Part history show, and then an escape at the end to see someone break out,” says Santini, who is hoping to return next month to shoot promotional footage—and maybe an escape or two.

Medieval Torture: Dark Deeds in the Dark Ages will be on display at the Historic Cornwall Jail during the month of August. Parental discretion is advised by the management. For further information visit www.cornwall.on.ca.