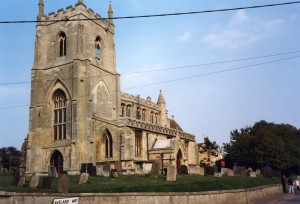 A medieval earth floor has been uncovered at a village church which is undergoing a massive renovation.

The discovery was made by builders at St James’ Church, Aslackby, last month.

Churchwarden Chris Gudgin, 67, of The Old Vicarage, Aslackby, said it was exciting.

He said: “The builders found it while relaying a stone floor.

“It was made up of layered deposits of straw and is likely to date back to the Saxon or Norman era.

“Having found it and recorded it, the floor was carefully covered back up.”

It appeared that the earth floor had been cut through at some point, and a masonry wall was also discovered in the west end at the church during part of the revamp.

He said building operations had to be adapted in order to preserve the floors and added: “It is good to piece together the development of the church over the years.”

Parishioners have been fundraising for seven years to modernise the building which involves the installation of a boiler which is nearly complete, as well as installing a kitchen and meeting room, under the £135,000 project, which began in June.

A false ceiling is also being added. Builders will also be putting in two toilets, including a disabled one, at the west corner of the north aisle.

The church completed the first phase of the project two years ago when the clock was repaired and a Hannovarian coat of arms was restored.

Mr Gudgin added: “We are on course for finishing the work early in September.”

The costs are hoped to be covered by grant funding and fundraising events.