Visiting a medieval monastery in Armenia 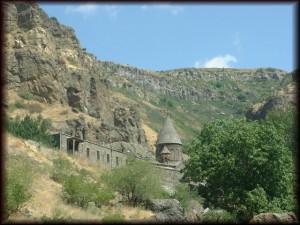 The medieval monastery of Geghard in Armenia’s Kotayk province appears almost camouflaged, being partially carved out of the adjacent mountain, surrounded by cliffs.

Geghard was listed as a UNESCO World Heritage Site in 2000 and although the monastery has been in place since before the 4th century, the main cathedral was built in 1215.

It takes the eyes a moment to adapt to the darkness of the cathedral’s interior, which is lit up by a stream of light from a hole in the cupola above.

Visitors strike matches on the grey walls, some of which are part of the cliff face, to light beeswax candles but even they fail to illuminate this dark space which is devoid of relics, statues, benches or pictures.

Armenians are once again proud of their religious heritage after it was suppressed for decades when the country was part of the Soviet Union.

Over 1,700 years ago, Armenia became the first country to declare Christianity as an established religion and traces of this long tradition are still visible in the southern Caucasus region.

However, this former Soviet Republic offers so much more, including enormous mountain ranges, fast-flowing rivers and excellent cuisine.

Geghard was initially known simply as Ayrivank (Cave Monastery) but was renamed as Geghard, meaning “lance” (spear) in Armenian. The name refers to the Holy Lance used by a Roman soldier to pierce Jesus’ side as he hung on the cross in John’s account of the Crucifixion.

The lance allegedly brought to Armenia by Apostle Jude, called Thaddeus here, was kept in Geghard for a long time before being moved to the museum of Echmiadzin Cathedral.

Tour guide Nelly Pilipossyan points out that the internal walls of the main church have many inscriptions recording donations.

There also many fine carvings, including a representation of trees with pomegranates hanging from their branches on the tympanum. Around the cupola there are detailed reliefs showing birds, human masks, animals heads, various rosettes and jars.

Armenia is approximately 30,000 square kilometres in size, the equivalent land mass of Belgium, and is a Christian state surrounded by Islamic neighbours.

Historically, wars were religious-based and their consequences reverberate in the region to the present day, especially when it comes to relations with Azerbaijan and Turkey, with the border to both countries remaining closed.

“Above all, we have to do something about the cost of flights. They are simply too expensive for a lot of travellers coming from the West,” explains tourism expert Araik Vardanyan from Armenia’s chamber of commerce.

While Armenia has a reputation for hospitality, that’s not enough. Currently, the country’s religious sites attract mostly elderly visitors, who make 40-kilometre day-trips to Geghard from the capital Yerevan.

There is also a hiking route from Geghard, which follows a 5 km trail through a gorge to Garni, famous for its fortress complex with the 1st century AD Garni Temple.

The Garni Gorge, meanwhile, has well preserved basalt columns, carved out by the Goght River, and is referred to as the “Symphony of the Stones.”