£1m for upgrades at Wales’ most popular museum 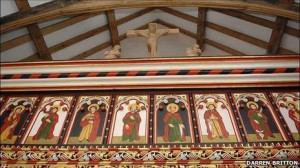 Wales’ most popular visitor attraction has been given £1m in new funding to carry out essential maintenance and crucial modernisation.

The money from the assembly government will help the St Fagans: National History Museum near Cardiff lay the foundations for a larger planned redevelopment.

Upgrading electrical and water capacity will be among the works carried out.

More than 20,000 visitors are expected over the August bank holiday weekend.

The £1m is in top of £400,000 of assembly government funding for the open air museum last year.

At the moment, the museum stretches back to cover 1,500 years of Welsh history.

But a 10-year, £20m project for the site would see the introduction of the National Archaeology Collection and an extended time-line to cover the 250,000 years of human inhabitation of Wales.

The museum recently received £450,000 from the Heritage Lottery Fund to develop their plans for that expansion.

There would be significant investment in interpretation across the site and the a new indoor space created in the grounds.

Existing galleries and visitor facilities would also be upgraded.

Heritage Minister Alun Ffred Jones said: “We are keen to ensure that St Fagan’s maintains its position at the heart of Welsh cultural life and its status as Wales’ premier free tourist attraction.

“It is vital that this much cherished national institution is upgraded and improved in order to present a modern, confident and diverse image of Wales to visitors.”

It is anticipated that the re-developed St Fagans will provide a major economic boost both during the construction phases and for the wider tourist economy.

St Fagans opened in 1948 as the first open-air museum in the UK, with the aim of portraying how the people of Wales lived, worked and spent their leisure time over the last 500 years.

The museum now has more than 40 original buildings, moved from around Wales and re-erected to show different periods in history.

It is Wales’s most popular visitor attraction and the second most visited open-air museum in Europe, attracting over 600,000 visits a year.