Lost medieval hospital to be uncovered 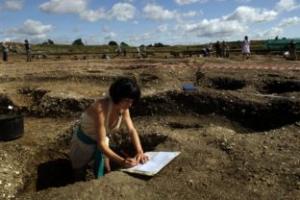 The public will get the chance to see one of Winchester lost medieval treasures as well as a cinema that dates from World War One.

Winchester University is holding an Archaeology Open Day this Saturday to view the excavations at the site of a former medieval hospital.

Known by locals as Hospital Field, St Mary Magdalen Hospital is situated about a mile outside the city’s boundaries on the Alresford Road.

The open day will give visitors a chance to see current excavation work and view the remains, as well as some of the artefacts unearthed from the last 900 years.

Dr Simon Roffey, from the Department of Archaeology, said: “Every year the university runs a major research and training excavation as part of its ongoing programme of research and practical training.

“In the past, excavations of this 12th century site have identified the existence of several features including a chapel, infirmary and cemeteries. Aspects from the post-medieval period have also been found, including the remains of late Tudor almshouses and a First World War base.”

Excavations this year focus on the area of the medieval infirmary, chapel, and associated buildings as well as a First World War theatre and cinema.

The cinema provided entertainment for British troops as well as other nations including America, India, Canada, Australia and New Zealand before they left for the battlefields of France and Belgium.

The open day runs from 10am until 4pm. There is no public parking on site this year. Regular transport runs to and from the site and the university, leaving on the hour from the King Alfred Campus on Sparkford Road, with the last bus at 3pm.