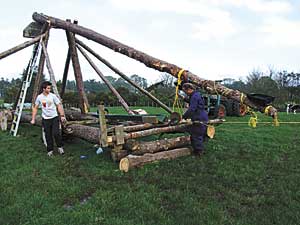 Finding the Hunger family farm on Pembroke Rd is easy – just look for a huge medieval trebuchet sticking up above the trees.

The trebuchet is an ancient siege weapon developed in the 12th Century in France and Asia as an improvement on a basic catapult.

It uses a slingshot to increase the velocity of the rock being hurled at the enemy walls. They were also used to fling diseased corpses and dead horses over the walls of besieged towns to infect the inhabitants.

In Stratford, Dave Hunger and his sons Andrew and Josh have far more peaceful intentions.

“We saw it on the internet and my boys talked me into doing it,” says Dave.
Initially, Josh and Andrew had made a small model trebuchet to throw stones, but it didn’t hurl them far enough, says Josh.

“So we asked Dad to help and he always does everything big,” he says.

The trebuchet has a 13m throwing arm atop a frame of tree trunks. It has a two tonne concrete block as a counterweight and can hurl a 20 kg projectile 100 metres.

They built it out of trees- with a whole trunk as the main throwing arm.

Dave felled some Lawsoniana trees to make it, and they even used rings off a log for wheels.
The trio started building it in the last school holidays, and have worked on it over the past two months.

They built it on the tanker track, says Dave, but when the cows started calving a few weeks ago and the milk tanker needed to use the track again, they moved it into a paddock.

It took two tractors to haul it. They had to remove a section of fence to fit it through and all the tree trunk wheels came off at least once during the move. It’s a permanent fixture now as they’ve lashed the machine on to strainer posts on each side for support because the frame wobbled alarmingly when standing alone, he says.

The project has left Dave with an appreciation of the engineering skills of the medieval warriors who invented the machine, he says.

They’ve been through a process of trial and error to perfect it.

The huge throwing arm has to be cranked down to load it for firing.

“In medieval days they used slaves to turn the handle, but I was quite short of slaves, so I use the tractor,” Dave says.

It’s an impressive procedure. The tractor slowly hauls the tree downward, then when the arm is fixed, Dave unhooks the tractor.Next, he adjusts a thick nail that holds the rope by giving it a few whacks with a hammer. The angle of this nail determines the trajectory of the missile, he explains.

When it’s fired, the huge machine is nearly silent apart from a few creaks. It swings gracefully upward, and the missile, a 20 litre bottle full of water, flies in an arc and explodes on landing in a fountain of water.

They’ve gone through quite a few bottles, Dave says. The wrecked bottles leave craters where they land.

He’s toying with how to make the firing even more impressive.

“We’ve got this idea to throw a flaming ball at night. I’m looking forward to doing that.”