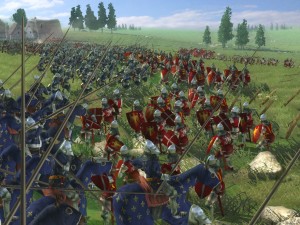 Publisher Slitherine’s latest title, HISTORY Great Battles Medieval is now due out at the end of September 2010 on Xbox 360, PS3 and PC. HISTORY is the leading cable television network offering award-winning non-fiction series and specials that invite viewers to experience the excitement and relevance of history – How, Why, What If…?.

Short Description
This strategy RPG is the most detailed and realistic medieval combat model ever created. In these epic encounters players must lead armies through the greatest of medieval wars and make history live again. Famous figures like The Black Prince, Joan of Arc and Henry V all take their turn in this epic conflict deploying new weapons and battle tactics that finally left England as an island nation.

Overview
With all the knowledge and backing from HISTORY, this strategy RPG is the most detailed and realistic medieval combat model ever created, claim Slitherine. Each man must stand tall. Each man’s mettle will be tested. But amongst all men there are leaders, there are those who will not be cowed. Can you be that leader? In these epic encounters players must lead armies through the greatest of medieval wars and make history live again. Famous figures like The Black Prince, Joan of Arc and Henry V all take their turn in fighting for nationalism deploying new weapons and battle tactics that finally left England as an island nation.

HISTORY Great Battles of the Middle Ages visual style is gritty and realistic. Battles can include hundreds or thousands of individuals. Each of these characters is crafted to accurately reflect the arms and armour of the time. All in game animations are motion captured using professional stunt actors. There are multiple variations for each animation to avoid soldiers looking like clones. And infantry, cavalry and archer units will raise or thrust their weapons in the air and shout a battle cry as they are rushing into battle. Whilst waiting units will taunt the enemy by banging on their shields, thrusting swords in the air and other animations. Of course, victorious units will cheer and raise weapons after routing or destroying enemy units.

HISTORY Great Battles Medieval is based on the historical events of the Hundred Years War, the most infamous conflict of medieval times fought between France and England that shaped the future of both for centuries to follow. It features Slitherine’s cutting edge graphic engine and a brand new game play system that allows players to be in complete control of massive armies.

From the thunderous charge of the knights to the men-at-arms fighting for their lives in hand-to-hand combat, the game will recreate the epic feel of medieval battles, featuring thousands of characters simultaneously. It’s not gory, but there is just enough battle violence for a 16 rating.

The player is continually rewarded as they progress through the game with money, unlocked equipment, units, and experience points. All of these allow the player to customise their army. This kind of customization has never been possible on such a large scale before and is really unique to the game. Many missions have main objectives and sub-objectives. There are Trophies and Achievements to acquire throughout the game in offline and online play.