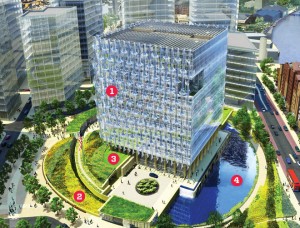 A US embassy is expected to extend the welcoming hand of democracy—while maintaining a 30-meter zone of blast protection. Such was the challenge facing KieranTimberlake when the architectural firm entered a State Department competition to design a new embassy on the banks of the Thames in London. Its winning plan, to be built by 2017, is part ultramodern masterpiece—sleek solar panels, a facade made of energy-conserving fluoropolymer “pillows,” spiraling green spaces—and part 11th-century castle. West Point professor Clifford J. Rogers, an expert in medieval military history, walks us through some features that the Normans would find quite normal.

1) Keep
If the central edifice (or keep) looks familiar, it’s because the Tower of London was built in the same style. “Square keeps were common in England after the Norman Conquest,” Rogers says. Rounded structures, which are better at deflecting arrows, were adopted in the 12th century. But with archery attacks on the decline, the floor-space-maximizing cube is again ideal.

2) Motte
“Castle builders needed to prevent enemies from attacking the base with a battering ram, which would have an effect similar to a small shaped charge today,” Rogers says. A sloped approach called a motte would slow the advance of any invading army or angry mob. In this case, it also covers additional underground facilities.

3) Bailey
The low wall at street level and the larger circular landscaped perimeter is reminiscent of a bailey, an enclosed courtyard that doubles as a first line of defense. “It’s not necessarily meant to stop the enemy dead,” Rogers says, “but to give you time to react and man the inner defense.” As in the Middle Ages, this wall can be patrolled by guards.

4) Moat
The reflecting pool evokes a castle moat. “To keep a medieval fortress secure, you needed to prevent people from taking pickaxes to the base or undermining it,” Rogers says. “A moat was one of the best ways to do that.” In olden days, they were also used to raise eels and fish for food. We imagine the US embassy will forgo that tradition.