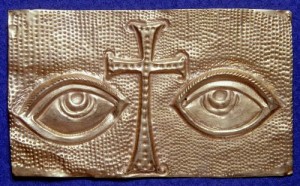 St. Peter carries the keys to the kingdom of heaven. St. Paul holds the saber, symbol of his beheading and belief that faith cuts like a double-edged sword.

Visitors to “Vatican Splendors: A Journey Through Faith and Art,” which opens today at the Heinz History Center, can distinguish the two Apostles in another way. Peter has a full head of hair and Paul is balding with a pointed beard.

Those visual cues are worth remembering as you pass two mannequins of Swiss guards and set off on a voyage into a sea of symbolism, a compressed history of the Roman Catholic Church and a carefully crafted kind of evangelization.

This show is an homage to Saints Peter and Paul, plus a look at the artists and popes who cared passionately about art and architecture. At opposite ends of one gallery are dramatic, carved marble reliefs showing the crucifixion of St. Peter and the martyrdom of St. Paul. There’s also a cast of the ancient graffiti that led archaeologists to discover St. Peter’s bones during a secret excavation between 1939 and 1949. The words “Petros Eni,” found on a red wall in the Vatican, mean “Peter is here.”

The early galleries include a model of the ancient St. Peter’s Basilica, which was built over the first pope’s tomb, and the newer basilica, which features Michelangelo’s cupola and was completed in 1615. Here, you will see a large iron caliper that Michelangelo may have used. It provides a stark contrast to the computer-assisted designs available in our modern era. The wonder is that such a simple, elegant tool played a vital role in the creation of Vatican City’s complex, elaborate architecture.

Michelangelo, that sculpting, painting, scaffold-climbing, dome-designing star of the Renaissance, is well-represented. Once you see the replica of his famous Pieta, be sure to pause at a smaller, impressionistic and unfinished version of this memorable scene commissioned by his close friend, Lady Vittoria Colonna.

A leading intellectual during the Renaissance, Lady Colonna was admired for her piety and known for her religious poetry.

“He wanted Lady Vittoria Colonna to finish the work in her mind’s eye as she gazed upon it,” said Brother Charles Hilken, a consultant to the exhibition and professor of medieval history at Saint Mary’s College of California in Moraga, Calif.

Lady Colonna’s friendship with Michelangelo began in 1536 when the artist returned to Rome to paint “The Last Judgment” on the back wall of the Sistine Chapel. After Mass at the Church of San Silvestro, the pair talked for hours in the garden outside the church, which still stands in Rome. Michelangeo showed her his drawings and also wrote 40 poems to the noblewoman.

“They would talk for hours with reform cardinals who were humanists and became leaders at the Council of Trent,” which led to church reforms, Brother Hilken said. “She was very influential. She finished his spiritual formation.”

Two of the most significant artworks are a 17th-century portrait of Jesus Christ wearing a crown of thorns, an image that has greatly influenced our modern conception of him. Painted in oil on silk, it’s the work of an artist known as “Il Guercino,” who had an eye problem and whose name, translated, means the squinter.

The second work, a fragment of a mosaic, shows an angel created by Giotto, regarded as the founder of Renaissance painting.

In the last gallery are portraits of John Paul II and his successor, Benedict XVI. Visitors will be able to touch a cast of the late pontiff’s right hand and also put their hand into an impression of his hand made in 2002.

With a smile and the help of a translator, exhibition curator Monsignor Roberto Zagnoli recalled the discussion that ensued between the artist and the pope’s secretary just before the first Polish pope plunged his hand into wet mud.

“They were really concerned about getting the pope’s hand dirty,” he said, adding that they suggested that John Paul II wear a glove or cover his hand in Vaseline.

The down-to-earth pontiff closed the debate, remarking, “I’m pretty old, but I still know how to wash my hands by myself.”