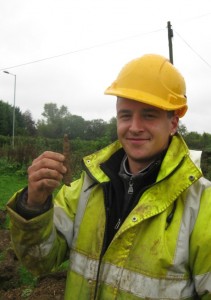 The remains of a medieval home have been unearthed in the town.

The outline of the house dating back to the 13th century was discovered by Northamptonshire Archaeology in Eastern Way on Friday.

Pieces of pottery and a blade of a knife from the same era were also discovered and the items could now be put on display at Daventry museum.

It is not yet known if the findings will hold up the development of Eastern Way, which has been earmarked for Daventry District Council’s WaterSpace project.

The team from Northamptonshire Archaeology was sent by Daventry District Council (DDC) as an evaluation of the land is required as part of  the planning application process.

On Friday Tim Upson-Smith, senior project supervisor at the site, said: “We have been here for the past two days and have dug three big holes in the ground and we have found absolutely nothing in those.

“In the final trench, we have found the outline of a house including the floors, some bits of pottery and the blade of a knife.

“It has been really great to find all these things as they date back to the 13th century.

“These items will now be cleaned up and then handed back to the landowner, which is in this case is DDC.

“They are likely to be eventually donated to the museum in Daventry.”

Historian David Adams from Daventry has said the finds could be a significant insight into how people lived in medieval times.

He said: “It sounds very interesting. It was possibly a house with a field on the edge of town where people travelling to the market could stop and leave their cattle overnight.

“It could also be the medieval equivalent of the tradesman’s entrance where people could have dumped rubbish.

“I would like to see the whole field dug up but I am not sure it will happen.

“There are other ways to search the field but I don’t expect there will be anything else down there, although it is a nice one-off find.”

Further work will now be undertaken at the site.

The archaeologists will do a geophysical survey of the proposed canal route.

And an archaeological survey will also be carried out on land to the south and east of Daventry Country Park, which falls within the proposed site of the Daventry canal arm.

Archaeologists will use scanners instead of excavation to determine the geophysical make-up of this area.

A spokesman for DDC said that until this is completed the authority will not be commenting on whether the findings could affect its plans for the WaterSpace.