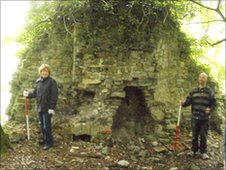 Amateur archaeologists in the Vale of Glamorgan believe they have uncovered a lost medieval village.

The Time Signs archaeology students made the discovery behind the railway viaduct at Porthkerry near Barry.

They are working with tutor Karl James Langford to prove his theory that the village of Whitelands existed.

A house platform which forms part of the manor house has been found as well as big quantities of medieval pottery and evidence of other buildings.

They have identified three sites that run along Whitelands brook including what they think is a medieval mill.

Archaeologists believe that Whitelands was established in around 1100 by the Normans to service the profitable natural harbour of Porthkerry.

Mr Langford says the village would have been formed as a ‘sub-manor’ to the larger neighbouring Cwm Ciddy and Porthkerry villages.

He believes that around 60 to 70 people could have lived in the settlement including around 10 in the manor house.

The community may have been involved in activities related to the harbour such as fishing.

Unlike Cwm Ciddy and Porthkerry, Whitelands did not have a church which Mr Langford suggests may be the reason that proof of its existence has disappeared from local history.

References to medieval and post medieval structures including the house platform in the vicinity can be found in the Sites Monuments Record, the main archaeological records for the area held by the Glamorgan-Gwent archaeological trust.

However no reference has ever been made to a deserted medieval village in Whitelands.

The house platform that has been located is thought to be part of the village’s manor house. The site is currently overgrown and students plan to return in the new year when some of the vegetation has died back to investigate further.

Mr Langford suggests the population of any village would have gradually dispersed from the 1300s onwards as climate changes resulted in the silting up of Porthkerry harbour.

The quay side of Whitelands was clearly visible from the new shore line which today is located under the golf course at Porthkerry.

The plague or Black Death which struck around 1348 would have wiped out any remaining residents of Whitelands.

Around 200 pieces of medieval pottery have already been discovered by the group including some imported glazed pottery which Mr Langford believes would have probably come from Bristol brought in along the coast by boat.

Mr Langford says he first became interested in the Whitelands area over 25 years ago when he went on walks as a boy.

He thinks the discovery of the village is significant historically is it helps build up a broader picture of the area’s history.

“Because this is hidden by woodland it’s difficult to trace. You don’t find examples such as this everyday,” he says.

“It will help to give us a clearer picture about the medieval harbour in Porthkerry and tell us more about life in the area in medieval times.”

Mr Langford is interested in hearing from anyone who may know more about the area’s local history and is also happy to hear from people who want to find out more about archaeology in the local area.