Medieval friars found in town dig to be reburied 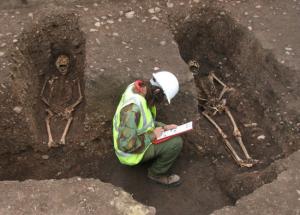 The remains of more than 20 medieval friars and lay associates of the Carmelite Order who died more than 500 years ago are to be reburied following their excavation during building works.

Eight medieval Carmelite friars were uncovered as part of an archaeological dig carried out ahead of a residential development in Priory Close, Northallerton, North Yorkshire.

The other 13 individuals and charnel deposits were unearthed at the site of a Carmelite friary that once stood near Westgate, Newcastle.

The excavations were carried out by archaeologists from Durham University between 2006 and 2008.

The remains will be reburied at Jesmond Old Cemetery, in Newcastle, in a service organised by the British Province of the Carmelite Order.

Prior of the Carmelite Friars in York Father Antony Lester said: “It came as something of a surprise to receive a phone call from the archaeologists in Durham asking us what we, as next-of-kin, wanted to do about the reburial of members of our order who died more than 500 years ago.

“But as fellow Carmelites, we feel a strong spiritual bond with all our brothers and sisters from the past, and it is right that they should be reinterred with dignity.”

The dig in Northallerton revealed that the town’s Carmelite priory – established in 1356 and suppressed at the Reformation – differed from other European Carmelite houses in its layout.

The team of researchers was able to establish the diet of the friars from excavated animal bones and detritus, and also managed to determine that one individual had been struck on the forehead, but lived to tell the tale.

The friary in Newcastle was established in 1262 and was a major centre of religious and social activity.

The remains of each body is individually boxed and will be buried in a single grave in a coffin donated by Co-Operative Funeralcare, in Durham.

A memorial Mass will be celebrated by the Prior Provincial of the Carmelites at The Holy Name of Jesus Catholic Church, in North Jesmond Avenue, at 11am on Monday, November 15, followed by a short service at the graveside.