Skulls go on display for anniversary of battle 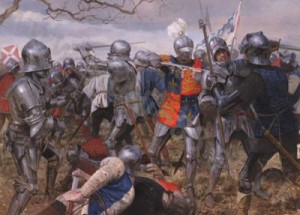 Human skulls scarred by sword and axe marks have gone on display in Wakefield to mark the 550th anniversary of the Battle of Wakefield.

The display at Wakefield Museum features the remains of some of the men who fought in a battle at Towton, North Yorkshire, shortly after the conflict in Wakefield.

The exhibition, which opened this week and runs until January, follows the build-up to the battle and the fighting itself through a comic strip specially created by illustrator John Welding.

It also includes finds from the battlefields at Sandal and Towton and shows the damage inflicted by weapons such as the poleaxe and armour-piercing arrow.

The display covers many aspects of medieval warfare and boasts a mixture of finds from the district’s archaeology collections and other items lent by experts and collectors and other battlefields from around the same time.

There is also an area designed for children to explore the subject through play and creativity.

One of the highlights is the remains of some of those who fought in the wars. The museum is exhibiting two skulls from Towton, a battle which took place a few months after the Battle of Wakefield.

The skulls, borrowed from Bradford University, are a shocking reminder of how brutal battle was in the 1400s. They are covered in sword, arrow and axe marks.

Visitors to the exhibition will also get the chance to discover what gruesome methods battlefield surgeons used to help wounded soldiers; study the events of that cold December day in 1460 from various accounts written at different times; and learn where Yorkshire’s obsession with the White Rose comes from.

The exhibition runs until January 29 and admission is free.

1 comment on “Skulls go on display for anniversary of battle”