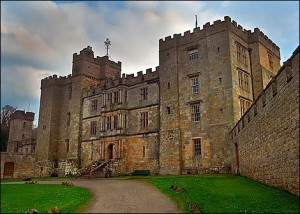 With Halloween just around the corner there is no better time of year to dabble in a bit of ghost hunting in some of the most beautiful and atmospheric parts of the country.

Take a break in North East England and discover its dark and turbulent past:

Chillingham Castle, dating back 800 years, is widely regarded as one of the most haunted places in England.

It has a truly amazing, yet horrific, history which is evident in its vast dungeons and torture chamber.

The castle is famed for its many ghost stories – the Blue Boy, Lady Mary and her child and the royal procession are among the most famous and sightings are well documented.

The stunning medieval castle, surrounded by acres of grounds has eight self-catering apartments situated both within the castle and in the old coaching rooms where you can stay if you’re brave enough!

In the heart of this stunning estate village, one of only six listed villages in England, is the Lord Crewe Arms. The hotel is in the centre of the village which has featured in many period dramas.

Dating back to the 12th Century, the hotel was originally the guest house and kitchens for Blanchland Abbey and is haunted by the ghost of Dorothy Forster, niece to the Bishop of Durham and Lady Crewe and sister to Tom Forster who plotted the 1715 Jacobite Rebellion.

Visitors wishing to see the haunted area have to pass through a huge doorway at the top of the stairs. The massive door was found recently to be the original inn sign and it was only after careful cleaning that the Lord Crewe’s coat of arms was revealed.

Dating back to Anglo-Saxon times, the castle was the target of invasions by the Normans, the Vikings and the Scottish. There have been countless sightings of Green Jane, Bamburgh’s ghost. A young woman carrying a bundle in her arms which is believed to be a baby, is seen walking down the steep steps of the clock tower. She stumbles and then cries out as she falls down the narrow stairway. It is alleged that this young lady was named Jane and lived in the local village.

She was sent by her family to beg for food at the castle. She was abused by the guards and then sent away. In a weakened state, she fell down the stairs and died with her baby in her arms.

Winter’s Gibbet stands on a wild moorland road above the village of Elsdon, deep in the wild Northumberland countryside, a replica of a severed head still swinging from it.

It is a grisly memorial to William Winter, the last man in England to be gibbeted. In 1791 he was charged, with his two sisters, with the murder of Margaret Crozier, who lived in a tower just north of Elsdon. The three were executed at the Westgate, Newcastle, the female bodies given to the surgeon’s hall for dissection while William Winter’s body was hung from the gibbet for all to see. It is said that the sound of rattling bones can often be heard there, especially on stormy nights, and that the ghosts of Winter and Jane and Eleanor Clark can been seen running from the old tower at Raw Pele.