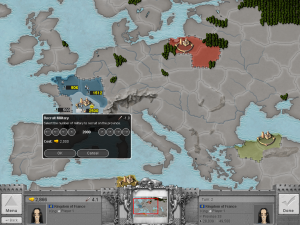 Age of Conquest III is a medieval Risk-like turn-based strategy game where you take the reins of a budding empire and struggle against other kingdoms for control of the world. One game supports competitions with up to hundred players.

Age of Conquest III contains maps from all over the world including Europe, North America, Asia, Africa, a World Map and many more. Scenarios range from ancient to modern times. The game features simple building options such as construction of fortifications and watch towers. A player governs over military strategy as well as income and spending. Diplomatic functions available are alliances, peace treaties, cease-fires and vassalage. An integrated map editor can be used to create custom maps and upload them to a central repository for other people to enjoy.

Noble Master Games is a professionally established company to serves as a resource for the global gaming community at large.