A Game of Thrones Trailer 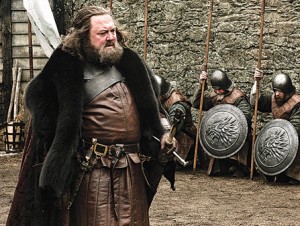 HBO released the latest teaser trailer for the highly-anticipated Game of Thrones miniseries last night. The show won’t premier until 2011, but you can now see sixty seconds of sword-swinging, head-chopping, medieval action.

Based on the incredibly popular Song of Ice and Fire novel series by George R. R. Martin, (A Game of Thrones is the title of the first book in the series), the story takes place in the fictional medieval kingdom of Westeros. The Stark family (no relation, Marvel fans) is thrust into the subtly vicious world of nobility after Eddard (Sean Bean, The Lord of the Rings) becomes the “Hand of the King,” a monarch’s second in command.

The book series focuses on seven Houses across various kingdoms. The novels are so sprawling and diverse that TV writers will have to pick and choose their stories if TV audiences are to keep up. For reference, the four books published so far total over 3,000 pages, and there are another three novels Martin has yet to write. Considering how much the movie adaptations of the Harry Potter novels (around 4,000 pages) have had to leave out, Game of Thrones could go on for ten seasons without grasping the width and breadth of its source material.

Check out the new Game of Thrones trailer below: