How The Sims Medieval hopes to hook noobs 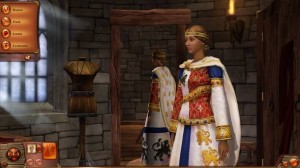 The Sims Medieval is a big leap away from the free-play Sims 3 experience. EA hopes this special Limited Edition will tempt legacy players and newcomers alike to give it a go.

The Sims Medieval Limited Edition goes up for pre-order December 14 on the game’s official site (which also re-launches that day with more content). Score yourself a copy to get exclusive content like three themed throne rooms and two outfit sets. It’s a good deal for established Sims players because the Sims Medieval curbs your choices in decor and costumes to fit the medieval setting; it’s a good deal for newcomers because who doesn’t like freebies? Especially since there are no Sims Medieval DLC plans in the works just yet, according to Sims Medieval Executive Producer Rachel Bernstein.

“We have a few things up our sleeves for the future,” Bernstein told GamePro. “But for the launch of The Sims Medieval, there will not be content for purchase to download into the game.”

The Limited Edition content includes Barbarian, Dark Magic, and Princess throne room themes and a Monarch and Executioner costume set. To really nail the look of each piece of content, the Sims Medieval team went back to the drawing board from which they originally drew ideas for the base game: movies about medieval stuff.

“When the mounted deer heads were added to the game, lead producer Kevin Gibson felt like trying to make a throne room that looked similar to the one seen in [Conan the Barbarian], just for fun,” she said. “He sent a screenshot around, and that’s what started [the Barbarian throne room idea].”

How The Sims Medieval hopes to hook noobs Despite the freebies with the Limited Edition and the sheer appeal of anything even vaguely inspired by Conan the Barbarian, the Sims Medieval is still a big risk for the Sims team. Though the game is largely a love letter from the developer to the established Sims community that’s always wanted medieval stuff, the whole structured gameplay experience is a lot to get used to — and a lot to learn if you’re coming at the game with no Sims experience.

“I hope we’ve done a good enough job in setting expectations so that when [people] start playing The Sims Medieval, they already know to expect a departure from The Sims games that have come before it and treat it as the standalone game that it is,” Bernstein said. “It’s not just a new time period and all-new content; it’s really a brand new game within The Sims series with an all-new feature set.”

1 comment on “How The Sims Medieval hopes to hook noobs”