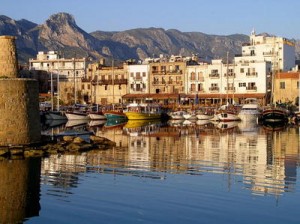 Northern Cyprus boasts a long and interesting history, much of which has made it into the colourful and exciting place that it is today, with its rich tapestry of different cultures and influences.

Take an island which may date as far back as 9,000 years; sprinkle in different and often interwoven cultures throughout the centuries such as the Phoenicians, the Persians, the Romans, the Muslims and the Byzantines; add the Venetians, Ottomans and British into the melting pot of civilisations and you will begin to understand the wealth of history which surrounds Northern Cyprus.

This Mediterranean bolt-hole might be small, but that does not make it any the less rich in history and you can feel the tides of time as you wander around the old port of Kyrenia with the imposing Kyrenia Castle from the Byzantine period or Nicosia, with its preserved Venetian fortifications.

You cannot fail to be captivated by the sense of history and the remains of the different civilisations which have all made their distinctive mark on Northern Cyprus.

Visit the Crusader castles of Kantara, St. Hilarion and Buffavento; or the celebrated thirteenth century Selimiye Mosque in Nicosia with its stunning Gothic architecture. Don’t forget to visit colourful Famagusta, with its rich mix of architecture from the cultures that passed through the city – the medieval churches, dating back to the Lusignan rule, such as Lala Mustafa Pasa Mosque (formerly St Nicholas Cathedral); the sturdy city walls from the times of the Venetians and the imposing Othello’s tower and citadel from the sixteenth century, guarding the town from invaders.

For a real taste of history, take the time to visit the ruins of Vouni Palace, said to have been built as far back as the fifth century B.C. which has yielded so much treasure and knowledge of the history of Northern Cyprus. Nearby is the ancient city of Soli, thought to have been founded in the sixth century B.C, with its Roman amphitheatre and market place.

Then there is Salamis, not to be missed by anybody who is fascinated by history. Once the ancient capital of Cyprus, this ancient, but very well preserved site is located to the north of Famagusta and dates back to the eleventh century B.C. It is now one of the most important archaeological sites in Cyprus and contains wonders such as a colonnaded gymnasium, Royal Tombs, Roman baths and an amphitheatre which would have held around 15,000 people.
The history of Northern Cyprus shines through in so many ways, including the food and drink which are heavily influenced by so many cultures including Middle Eastern, Mediterranean and Turkish flavours.

For a holiday steeped in culture and history, and yet enjoying everything that the modern world has to offer, visit NorthernCyprus.com, where you will find North Cyprus holidays, hotels, villas and flights at discounted prices.