Couple’s home really is their castle 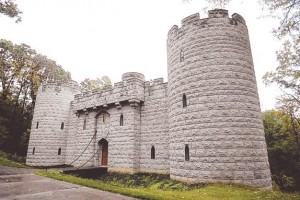 Cara McCandless and Barton Branstetter have never forgotten their storybook wedding trip to Thornbury Castle Hotel in South Gloucestershire, England. They lolled and loved in the footsteps of King Henry VIII, who spent 10 days in 1535 in the grand country fortress with his beloved Anne Boleyn.

Then, 12 years after their 1994 wedding, the Pennsylvania couple added a new chapter to their romance.

After finding a 3-acre lot in Marshall, a township near Pittsburgh, they asked architect Alan Dunn to design them a castle of their own.

Modeled after Bodiam Castle in East Sussex, the 7,000-square-foot house is about as medieval as you can get in modern times, with battlements and turrets, arrow slit windows and even a drawbridge leading across a dry moat to the front door.

Read the full story at The Reporter