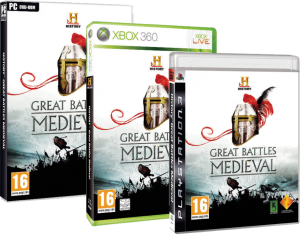 Actually the game has been available in the UK since last fall. But it is now available in the US market. I did a review of the game that you can view here -> Great Battles Medieval Review The review includes numerous screenshots and some videos. I would recommend this game to anyone. It is very fun and highly addictive. Read the review and then run out and get yourself a copy!

Press Release:
Slitherine and Matrix Games are thrilled to announce the release of HISTORY™ Great Battles Medieval for the PC! Now gamers can enjoy the unique and intense blend of strategy and role playing set in the dramatic backdrop of the Hundred Years War.

David Heath, Director of Operations at Matrix Games, said “This game has it all, thrilling medieval strategy, role playing and progression elements that keep you coming back for more, beautiful 3D battlefields, and a very friendly user interface. Once you start to build your mighty army and bring your enemies to battle, you’ll be hooked for sure!”

This is the Hundred Years War. Each man must stand tall. Each man’s mettle will be tested. But amongst all men there are leaders, there are those who will not be cowed. Can you be that leader? In this epic strategy RPG you will lead your army through the greatest of medieval wars and make history live again.

HISTORY™ Great Battles Medieval is a unique blend of Real-Time Strategy and Role-playing that allows you to develop your army; gaining experience, abilities and equipment to customize your troops. Success can never be guaranteed but to give you the best chance you must engage in careful preparation and be sure to equip your squads to meet every eventuality. In addition, an exciting Battle Card system will give you unique advantages which can turn the tide of battle if used at the right time!

In HISTORY™ Great Battles Medieval you take command as a general in control of English or French forces during the Hundred Years War. As the English you will fight under the Black Prince, Henry V and other heroic characters from history, and as the French you fight for the famous Joan of Arc and the King.