Hole in the head: How medieval soldiers survived after battle thanks to early day brain surgery

11 April 2011 Archivist Archaeology Comments Off on Hole in the head: How medieval soldiers survived after battle thanks to early day brain surgery 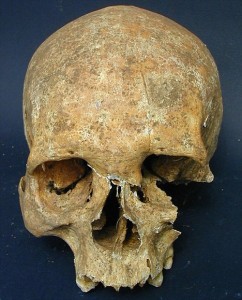 A massive haul of bones discovered in a medieval graveyard has given an insight into the medical capabilities of people 1,500 years ago.

The skeletons, found in central Italy, show that many soldiers buried close to one another survived after suffering blows to the head with maces and battle axes.

There are signs of medical interventions with one man going on to live despite having a two inch hole in his head, probably caused by a Byzantine mace.
Skulls: Despite mace and axe blows some of the medieval soldiers went on to live for a long time thanks to primitive ‘brain surgery’

The edges of the wound are smooth and have no fragments, suggesting the victim went through the equivalent of medieval brain surgery.

Anthropologist Mauro Rubini said ‘Probably the margins were polished with an abrasive instrument.’

The bone, from around 500 and 700AD, had started healing and growing closed before the man died.

A second skull had a wedge-shaped dent, probably from an axe. He also appears to have survived for a long time after he was hit.