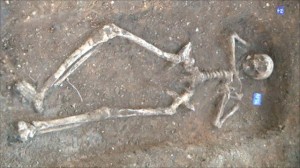 The bones of two Anglo-Saxon soldiers have been discovered beneath former Army barracks in Colchester.

They may have lived and fought in the 5th or 6th Century AD, Colchester Archaeological Trust said.

The bodies had shields on their chests, spears to one side and one had a dagger in a belt around his waist.

The skeletons were found beneath Hyderbad and Meanee Barracks, once home to 3rd Battalion Parachute Regiment, which are being redeveloped as housing.

“There is a strong probability these were post Roman ‘spearmen’, with Germanic or Saxon origin,” said Trust director Philip Crummy.