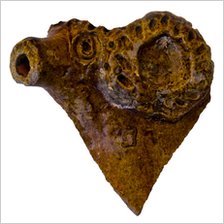 A 13th Century pottery vessel found in the Vale of Glamorgan could indicate a thriving local craft in medieval times.

Several fragments of the aquamanile, decorated with a ram’s head, were discovered at the site of a manor house at Cosmeston, near Penarth.

The vessels were used by guests to wash their hands at the dinner table.

Professor John Hines from Cardiff University, leader of the dig, said they had never found such an elegant piece made from the local Vale Ware.

The 20-strong team from the university’s school of history, archaeology and religion has been digging at the Cosmeston medieval village for the last 4 years.

They have been exploring the site of a manor house, which had not been excavated when archaeology work was first carried out in the area in the 1980s.