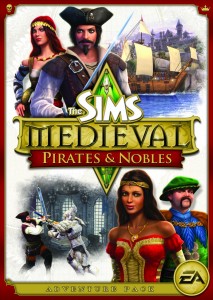 Sims Medieval launched back in March and now, five short months later, Electronic Arts is ruining it by adding pirates. The expansion pack Pirates and Nobles will be available in August. Granted there were pirates in the medieval era. I even did a podcast about the most notorious pirate of the 12th Century, Eustace the Monk. However, from the screen shots I have seen the pirates appear to be based in the Golden Age of Piracy or roughly 1690 to 1730. making a Sims: Pirates would make more sense. But putting Pirates into the medieval realm is purely a marketing tactic to profit form the current hype of certain pirate movies that shall not be named… Do you think pirates belong in Sims Medieval? Are you going to buy the expansion?

The Sims Medieval: Pirates and Nobles

How much “YAR!” can you handle? The Sims Medieval came out back in March and as we might have seen with other Sims games, we have a new expansion ready to roll out in Pirates and Nobles. As the title implies, it adds pirates and nobles to the mix of your kingdom where you are still the ruler and are able to influence the daily activities of all of your citizens.

The storyline to this expansion also builds on the current questing- and story-based gameplay that was newer to the Sims franchise with this title. In this expansion, there is a story of forbidden love between these two groups and your job is to either help it along or destroy any hope of them making amends for the sake of the two star-crossed lovers who are NOT Romeo and Juliet.

In addition to the new quests, items and characters, there is a new treasure hunting system in the game that will give your pirates the choice to search the land for buried treasure using maps that you find and earn. There is quite an abundance of new items and you will have plenty of hours to spend trying to unearth all of them.

Something that has also been added to the expansion is the addition of little flying birds. The pirates will have the option to use parrots to help them out on their quests, whereas the nobles will have falcons to help them find treasure and solve puzzles. Of course, you will also be able to have cages for them to live in and at the moment there is no confirmation that they will be able to say, “Polly want a cracker.” Hopefully, it will not be confirmed since there is no way to translate anything into Simlish.

Read the full article at Destructiod