Oystermouth Castle in Swansea bay re-opens to the public 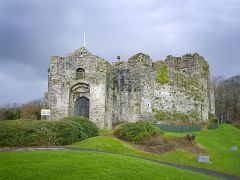 It was twice burnt to the ground by rebellious Welsh princes and was “Camelot” for the ancient lords of Gower.

Now romantic Oystermouth Castle, set on a commanding hill overlooking Swansea Bay at Mumbles, is to re-open to the public after a £1.7m makeover.

Half of the crumbling medieval castle had been closed to the public for safety reasons, but the revamp is helping to return it to something like its former glory.

Oystermouth Castle currently attracts about 5,000 visitors a year, but it is felt thousands more could come by 2014 when the work is finally complete.

Swansea council which is behind the conservation work, helped by grants from Cadw, the European Regional Development Fund and the Heritage Lottery Fund, is also planning to re-open the long closed city-centre Swansea Castle to the public.

It is part of a scheme to offer Swansea’s rich heritage of Norman castles including those at Pennard, Weobley, Penrice and Oxwich to tourists.

The first fortress at Oystermouth, set on a bank overlooking the sea, was established by William De Londres, who also built Ogmore on the banks of the Ewenny.