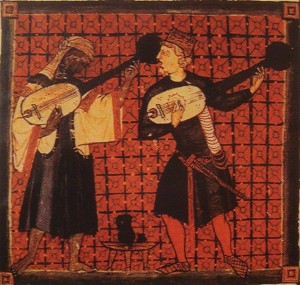 UK digital channel BBC4 has unveiled a host of factual commissions, including a major new arts series, Art Nouveau, and medieval history series The Private Lives of the Medieval Kings.

The commissions were revealed by BBC4 controlled Richard Klein (pictured above) during the Edinburgh International Television Festival, which is currently taking place in Scotland.

The Private Lives of the Medieval Kings, a 3 x 60-minute series presented by art historian Dr Janina Ramirez, aims to tell the story of the world of the medieval monarchy, as preserved through illuminated Royal manuscripts which form part of the British Library’s Royal Collection.

The series is produced by Oxford Film and Television, with Nick Kent the exec producer. It was commissioned by BBC commissioning editor for arts Mark Bell.

“The story of the Medieval Kings was captured through beautiful manuscripts that remain as vibrant today as when they were first penned,” said Klein. “BBC4 will recreate that world, drawing on Dr Janina Ramirez’s in-depth expert knowledge, to decode the manuscripts.