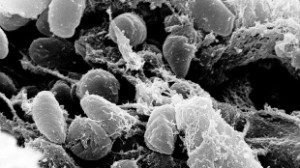 Using a technique for extracting ancient DNA, researchers have found that the form of Yersinia pestis that caused the Black Death in medieval Europe may be extinct, according to a new study publishing today (August 29) in PNAS. The new approach could help researchers understand why that pandemic was so deadly.

“It’s a really interesting piece of work and really nicely done,” said Anne Stone, a biological anthropologist at Arizona State University. “Understanding the evolution of the bacterium is important for potentially predicting what future outbreaks might be like and why some outbreaks are worse than others.”

Between 1347 and 1350 the Black Death spread like wildfire from ports in Turkey to Italy, France, and England, killing around 30 to 50 million people, or a third to a half of Europe’s population. Researchers believe the plague bacterium, Yersinia pestis, was carried in ships by rats from its reservoir in Central Asia. Since then, there have been a series of less catastrophic outbreaks, and worldwide about 2,000 people still die of plague every year, said study co-author Hendrik Poinar, an evolutionary geneticist at McMaster University in Canada.

Read the full story at The Scientist