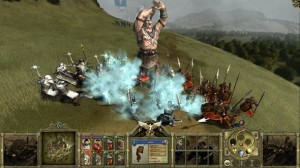 King Arthur: Fallen Champion (hereafter: KAFC) is a $10 standalone stopgap between King Arthur: The Roleplaying Wargame and King Arthur II. Set in the mythical kingdom of Britannia, what seems like a boilerplate medieval romp veers off into fantastical absurdity almost immediately. I’m a sucker for this sort of thing: spell-slinging ghosts and valiant heroes marching in lockstep against aggressor-hordes. But while KAFC offers up a fanciful setting and has some interesting design tricks up its sleeve, the important bits — namely, combat — are straight up broken.

The game opens up with a map of Britannia, on which the three heroes are positioned to set off on their adventures. There’s Drest the Chosen, a shaman hoping to reform his wayward people; Sir Lionel wants to save a damsel in distress from a villainous Red Knight; and Lady Corrigan of the Sidhe — a mystical race of Faerie Lords — just wants to go home. You can play the campaigns in whatever order you’d like, even switching up between combat scenarios if you’d like a better idea of how the stories intertwine. This kind of variety and non-linear storytelling was great.

Also great: each scenario is split into two parts: an adventure and a battle. The adventure segment plays like a mid-90s Choose Your Own adventure book, complete with fanciful illustrations. The adventure-narratives determine your stats and unit composition for the fight that follows, in the form of companions, or boosts to particular stats. The adventure segments are quick, but they add a surprising amount of depth to what’s a rather short title to begin with. But more importantly, they’re clever and fun.