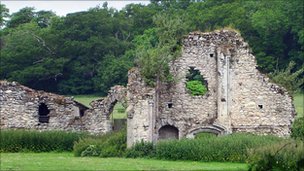 Monks at an Isle of Wight monastery say they are hopeful of saving medieval abbey ruins, after they were recognised in an international heritage survey.

The Cistercian Abbey of St Mary’s at Quarr is among 67 “most at-risk” sites listed by the World Monuments Fund (WMF).

The monks say the listing will make it easier to apply for repair work grants.

The 12th Century ruins, monastic buildings and infrastructure are all in need of attention, the survey said.

The abbey was established on the north coast of the island and was closed in 1536 as part of Henry VIII’s dissolution of the monasteries.

The remains of abbey sit in the grounds of a monastery which is still functioning and is home to a community of eight Benedictine monks.