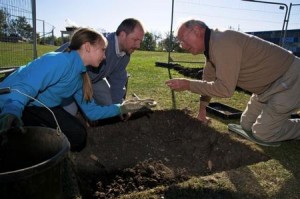 Medieval pottery and a belt buckle were among the items unearthed during a two-day dig at Queenborough Castle on Friday and Saturday.

It was the first project at the site – known locally as the Welly Bank – since Channel 4’s Time Team came to town in 2005.

As well as the pottery – dating from the castle’s 300-year lifetime – they found animal bones, oyster shells and old wall stones.

A more recent find, probably from the last 100 years, was a small slate pencil – a relic from the school which once stood on the neighbouring Castle Connections site.

It is hoped once cleaned and examined by experts, the items will go on display early next year at Castle Connections while trees will be planted later this year in the eight beds as part of the Queenborough Castle Project.

The project, run by KCC, Swale council and the Heritage Lottery Fund, aims to bring the castle back to life and give a better understanding of how it once looked.