I have received quite a few emails and comments regarding the National Geographic Reality Show Knights of Mayhem. There is a definate polarization of those that love the show and those that hate it, vehemently! I’m going to wait and give you my final judgement when the show is over. But until then, for those of you who love it and for those who do not…

Here is the lineup of the main ‘Knights’: 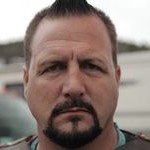 If you’ve heard of jousting, it’s quite likely you’ve heard the name Charlie Andrews. Charlie is not only the current reigning world champion, but one of four founding members of the sport. He helped pioneer and evolve jousting into the fierce competition it has become today and in 2010 he co-founded the UJC (Ultimate Jousting Championship)—the professional venue for the sport. As the head of the Knights of Mayhem and reigning world champion, Charlie is the most marked man in all of jousting. At last year’s world championships, Charlie unseated his rival and then-world champion Patrick Lambke to take the crown. This year, everyone is after Charlie. And while trying to defend his crown Charlie will continue to try and build jousting into a nationally recognized sport. 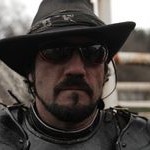 If there is one knight who can say, “I taught Charlie all he knows,” it’s the Black Knight, Patrick Lambke. Since getting his start in the 1990s, Patrick has become one of the biggest proponents of heavy armor jousting. He was fresh out of the military and starting a career as a stunt photographer when he was asked to help out on a joust. He was hooked and began jousting soon thereafter. One of his fellow Knights refers to Patrick as “a cross between a villain and a hero, with more traits of a villain depending on the day. A guy you’d love to have by your side in wartime, but if he came home with your daughter, you’d freak.” Patrick is the lone grandfather of the troupe, with 4 kids and two grandchildren. He trains on his ranch in Missouri by jousting the heaviest thing he can find, pianos, which, ironically, he also repairs. After 20 years of jousting, his list of injuries is gruesomely long, but with age comes wisdom. This year, Patrick is hoping to win his title back from his protégé, Charlie Andrews. 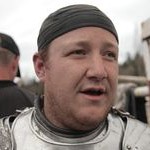 Standing 5’10”, Jason is a common underdog and the smallest man in the Knights of Mayhem. Competing against jousters much larger, jousting has caused him to take some vicious falls. While the most common injuries in jousting typically are broken hands and dislocated shoulders, it’s lingering pain from a broken collarbone and fractured sternum that have Jason concerned. He fears the results may force him to make this year of jousting his last. One of a handful of Canadians in the troupe, Jason first wanted to joust after attending a “Medieval Times” show with his parents at the age of 7. Now 30, Jason is a professional blacksmith by trade and knows armor inside and out. Jason says that the most dangerous part of jousting is a shattering lance, although falls are also deadly and have given him countless concussions. Even with the risks, he says there is no feeling like jousting. “If this is my last year, I want to go out with a bang,” he said. To Jason that would mean being one of the top three jousters in the world, and surviving. Last year, despite his size disadvantage, he finished 4th at the World Championships. This year in Vegas, he’ll have his wife, mother-in-law and father-in-law there for the first time to watch him compete in what could be his final joust. 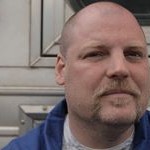 Hailing from Chelsea, Michigan, Brian Stephenson is one of Charlie’s senior knights. An electrician during the weekdays, Stephenson travels to tournaments on weekends usually leaving behind his wife and three children. Brian is considered a serious contender to take Charlie’s crown, and at 6’ 2”, 250 pounds, he has the size to do it. “I’m probably the one they’ll have to worry about the most. When I’m on, I’m on.” Last year, after booking his airline ticket for the World Championships, Brian was informed by Jason Armstrong that he’d have no horse to use at the event. Brian, livid, blamed this “miscommunication” on Jason and is hell bent on settling the score. This time around, Brian won’t have to worry about having a horse. Last fall, he bought “Oliver” and has been training non-stop in an effort to prove his worth, dethrone Charlie and take down anyone else who stands in his way. “I’m ready to prove myself out there, that I can do it with the best.”

5 comments on “Meet the Knights of ‘Knights of Mayhem’”