We are back today with the trifecta for the Rama: Travel App. There was the Medieval Exeter tour and earlier this month I reviewed the Medieval Winchester tour. Last week Crimson Bamboo, the company behind the Rama Travel App released the Medieval Glastonbury tour by Tom Vivian (Twitter: @tomvivan). Medieval Glastonbury is available for $1.99 USD, covers 1.2 miles (2km) and takes approximately 90 minutes. The only requirement to use the app is an internet connection, either Wi-Fi or 3G to utilize the GPS map feature. 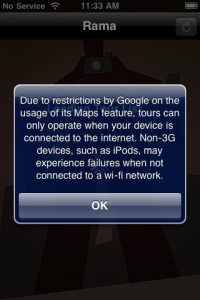 Glastonbury, located in Southwest England and only 60 miles from Exeter is a medievalists dream. Early settlements date back thousands of years but it was during the medieval era that the town flourished. Home to the Glastonbury Abbey one of the most important Abbeys in England. Second only to Westminster Abbey in its endowments and riches. Glastonbury is also home to two of the most famous and debated figures in history, the Holy Grail and King Arthur. 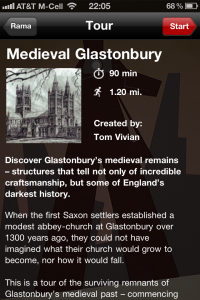 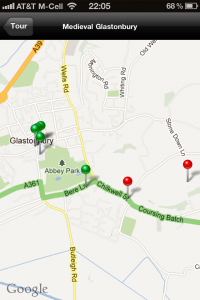 Legend has it that Joseph of Arimathea founded the abbey in the 1st century and hid the Holy Grail on the abbey grounds. In the 12th century a grave was discovered containing two skeletons and an inscription: Hic jacet sepultus inclitus rex Arthurus in insula Avalonia (“Here lies renowned King Arthur in the island of Avalon”). 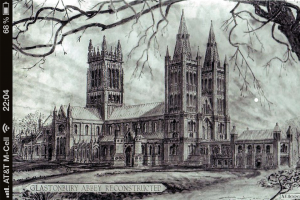 For this tour Tom focuses on the facts, not the legends. The extraordinary Glastonbury Abbey is the first of seven waypoints. Other points of interest include ‘The George and Pilgrim’ a resting place for medieval pilgrims, the Abbey Barn and St. Michael. Each waypoint includes written instructions to the next destination, which is a nice touch and ensures that you don’t lose your way while on the tour.

I have discussed the interface in the previous Exeter and Winchester tours. It is still the same, simply, intuitive and well done. 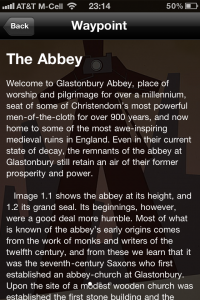 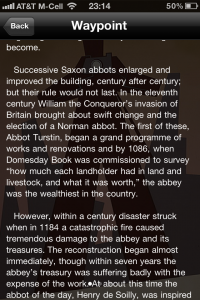 Glastonbury is an ancient city with roots firmly planted in the Middle Ages. The Abbey stood as a beacon of power for over 700 years until King Henry VIII broke from the Catholic church and ordered the dissolution of the monasteries. Tom Vivian captures the spirit of Glastonbury with his vivid and descriptive writing, conjuring images of the medieval city at its prime. A bibliography of Glastonbury history and archaeology books rounds out the tour. If you are in Glastonbury, planning a trip, or want to learn the history of the city then you need this tour.

Get the Rama: Travel App for History Lovers from the iTunes Store.