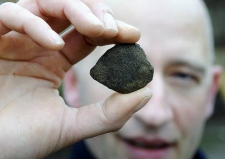 The excavation, or trial by trenching, of the former library site in Church Street is being headed by Chris Birks Archaeological Services, based in Frettenham, near Norwich.

It was originally ordered by Breckland Council and Norfolk County Council’s Historic Environment Service, based at the Gressenhall Farm and Workhouse Museum, near Dereham.

An application has been approved by the council to build flats on the previously unexplored site and it is part of the planning process to carry out an archaeological survey.

In early 2010 the library was demolished and the planning proposal was submitted by Acorn Building Services Norfolk.

The excavation, which started two weeks ago, is due to finish next week and on January 12 a small piece of pottery was found which is believed to date back to the 14th century.

Mr Birks said: “It is a great opportunity to try to understand what happened in the middle of Dereham in the past. It is confirming the settlement activities from the medieval period.

“Although it is only one piece of pottery, it is about getting an understanding of what people’s lives were like at the time.