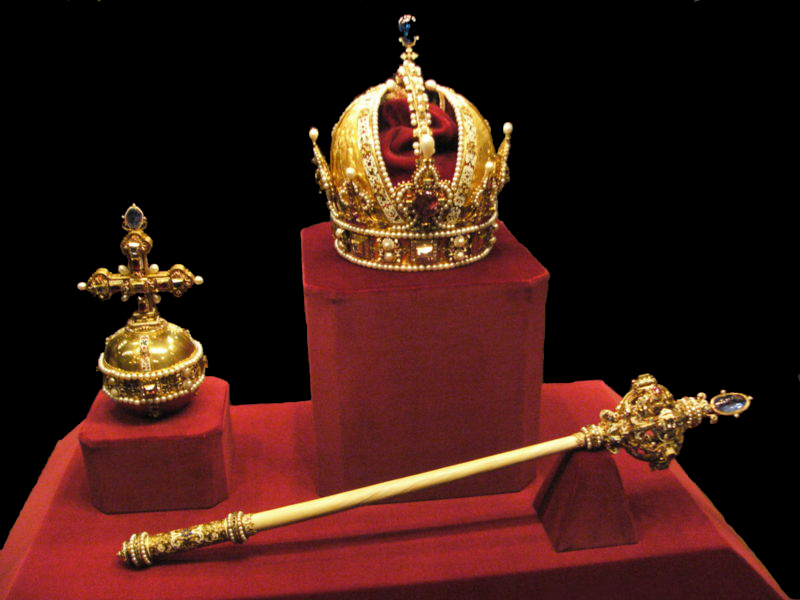 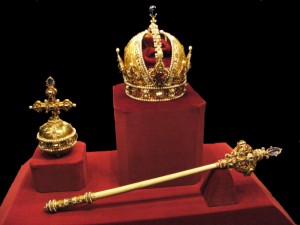 The octagonal crown fashioned from pure gold is studded with 144 precious stones and just as many pearls yet it is a priceless artifact for other reasons.

The crown almost certainly once graced the head of the first German emperor Otto I more than 1,000 years ago. For hundreds of years it has been one of the most potent symbols of the Holy Roman Empire, the German kingdom which stretched across most of Central Europe.

Today it rests together with the other Austrian crown jewels behind reinforced glass in the Imperial Treasury or ‘Schatzkammer’ at the Hofburg palace in the Austrian capital Vienna.

‘Around 280,000 visitors come here every year,’ said Anja Priewe who works for the marketing department of the city’s tourist authority. Tourists flock to see the imperial regalia but few of them take the time to look closely at particular objects.

French historian Henri Gillard studied the imperial insignia in detail and has much to tell about their history and significance. ‘At the beginning of the 19th century they were brought here from Aachen and Nuremberg to save them from advancing troops under Napoleon,’ he explains.

The most important of the crown jewels are the Imperial Orb, the Sceptre, Sword and Holy Lance. ‘This is one the most complete set of royal objects dating back to the Middle Ages that we have,’ said Gaillard. The Treasury of the Order of the Golden Fleece, which was founded in 1430, is also kept at the Hofburg. That collection houses various Order items, including flowing ecclesiastical vestments. Also kept at the Hofburg is the Crown of the Austrian Empire which was made in Prague in 1602 and represents one of the pinnacles of the European goldsmith’s art.