Full Metal Jousting (FMJ) debuted on the History channel Sunday night pulling in over 1.9 million viewers, finishing second in its time slot. FMJ is produced by Pilgrim Studios which has produced other hits including Dirty Jobs, American Chopper, Top Shot and The Ultimate Fighter. Their use of high speed and aerial cameras is superb. (Side note: to really see their high speed camera work in action watch Top Shot, also on History channel).

I will break down the episodes and throw in history as it applies to the medieval era. WARNING: As with all recaps there will be spoilers, including the eliminated jouster.

We first see the contestants standing near the jousting list and the host, Shane Adams rides in on his white horse. According to his bio on the History Channel website Shane “holds 17 international jousting titles and co-founded numerous competitive spectacles around North America.” Shane is also the team captain of Knights of Valor, a jousting troupe that travels North America educating students and demonstrating full contact jousting. Shane informs the contestants of the general rules of the show: they will be divided into two teams, a Red Team and a Black Team. Each week one member of the Red Team will joust a member of the Black Team, the winner moves on to the next round and the loser is eliminated. 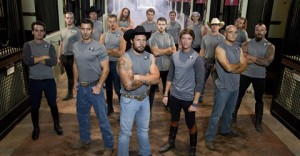 We are then introduced to the team coaches. Coaching the red team is American jouster Ripper Moore. Ripper started his jousting career in 1996 and is a two time World Champion. Heading the black team is Australian Rod Walker. Rod began jousting in the 1990’s and is a founding member of the International Jousting Association.

Instead of flipping a coin for first pick the assistant coaches will joust. While they get prepared Shane explains the scoring system. Each jouster will wear a small shield on their left shoulder called a grand guard.

History Alert:
The grand guard first appeared in the 15th century as extra protection for the left shoulder and chest. It was implemented when jousting become more of a sport and less of a military evolution.

After five passes the Black Team wins with 10 points while the Red Team has -2 points. The Red coach had a head shot in one of the passes. Black Team gets the first pick and Coach Rod chooses Rope Myers. The teams are list below in order of pick:

The teams are taken to the stables to meet their other teammates, the horse. And they are beautiful! The six destrier horses are: Navarro, Crispin, Jefferson, Gulliver, Superman and Praetorian.

History Alert:
Destrier is the best known war horse of the medieval era. Destrier is not a breed of horse but rather a type, it is the biggest and strongest of the three types of war horses. The other two are Courser and Rouncey. The Courser, while strong is the fastest war horse and the Rouncey was an all purpose war horse, used for riding, as a pack horse and trained for war. Although the destrier is the best known and most coveted war horse it was also the least common.

The stables, living quarters and ranch in general are amazing! Full Metal Jousting is filmed at Providence Hill Farm located in Jackson, Mississippi.

The teams are shown their locker rooms and they are lined with suits of armor. I have to say it because no one on the show did; the armor looks a lot like Ironman and War Machine! The only thing missing is the power source on the chest. I find it hard to believe that no one picked up on this fact. Ironman is one of the most popular movies in the last 4 years! 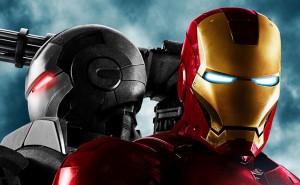 I would have loved to been in the production meetings when they were pitching the design of this armor. “yeah, see, were gonna have Ironman and War Machine battle each other on horseback, see. It’s like super heroes go medieval, see. It’s a killer idea, see, killer I say!” Then the boardroom explodes in applause and they carry the pitchman out on their shoulders. That has to be how it happened…maybe not.

The armor is made from 14 gauge stainless steel and weighs in at 80 pounds. The 10 pound lances are 11 feet of solid douglas fir.

History Alert:
Jousting armor began as regular chain mail, called mail, and evolved into the plate armor that we associate with knights today. By the 15th century jousting armor was specialized and weighed as much as 100 pounds. It was not intended for combat.

In the locker room Coach Ripper tells the Red Team that jousting is all about “Pain Tolerance” and they have all proven they have it. The next morning Ripper gathers the Red team and begins a military inspired workout starting with group push-ups. And it seems to help the team come together. The Black team doesn’t use the same bonding techniques and so far doesn’t appear to be as cohesive as the Red team.

Black Team Practice
At the first Black team practice we are introduced to the battering ram. The jousters, in full armor stand in front of the ram while four others slam it into their chest. Shane explains that this is one way to get a feel for what it’s like to get hit with a lance. We watch as the team members take the hit and fly backwards. Shane gives them some sage advice: “keep your mouths closed, do not stick out your tongue, you will bite it off.” Good advice indeed.

Red Team Practice
At the Red teams first practice they get a different method for simulating a lance hit, a baseball bat! The jousters charge down the list where assistant coaches bash their grand guard with baseball bats. They all seem undeterred by the hits and are ready for the real thing.

Jousting Match-up
After the first practice session the teams meet to pick the jousting match-up. Black Team has control and Rod chooses Josh K. to represent the Black Team. His opponent will be Mike Edwards, the #1 pick for the Red Team. Coach Rod explains that Mike will be a good jouster once he has more training so they want to knock him out quickly. After the jousters are picked the coaches accompany Shane to the stables and they pick horses. Coach Rod picks Navarro for Josh and Coach Ripper picks Crispin for Mike. Coach Ripper justifies his pick stating Crispin is a steadier horse and will take care of Mike

Final Practice
The final practice looked similar for both teams. We see the Black Team on the training grounds having a go at the quintain, referred to as the ‘spinning quintain’ in the show. As Josh is practicing the Red Team jogs by in formation and Mike is leading them in a cadence meant to intimidate Josh and the Black Team. It doesn’t seem to have the desired effect. Coach Rod decides to suit up and take the first hits from his team. Josh connects with a solid hit and unhorses Coach Rod. As he is lying on the ground he yells “bad fall, bad fall”, followed by “lift the visor, I’m going to throw up.” Needless to say Josh rocked him and he goes into the joust with a little extra confidence.

The Red Team also trains the quintain. Coach Ripper has the Red Team joust each other during their final practice. While James and Mike are jousting, James connects and unhorses Mike. Everyone is shocked as James is one of the smaller guys in the competition. I think it proves that jousting isn’t necessarily about size but more about technique. Shane tells Mike to forget the hit and get back on the horse and go again. Mike mounts up and proceeds to break his next 3 lances with solid hits.

History Alert:
Quintain is not an apparatus but a term. It describes a collection of lance games used for jousting training. The goal is to strike an object with a lance or sword. The object was usually a shield or a board on a pole. However, a seated armored knight was sometimes used as well. An example of this was when Coach Rod suited up and let Josh hit him.

The jousters gather their horses and prepare them for the joust. I was glad to see the jousters are responsible for the horses and that the horses are wearing armor. The horses are an integral part of the sport and it would have taken away from the experience, of both the viewer and jouster, if they let squires (ranch hands) take care of the horses. The horses on FMJ have an added level of armor in the way of clear eye protection.

History Alert:
Horse Armor or barding became prevalent in the 14th century. During the Battle of Bannockburn (1314) and the Battle of Crécy (1346) unarmored horses were targeted by archers to unseat the armored riders.

Josh Knowles wins and moves on to the next round.

Mike and all the contestants are informed that the loser will not be going home. They will stay on and practice with their team. If anyone is injured or unable to continue on of the losers will be eligible to return.

Overall FMJ is an entertaining show with a fair amount of medieval history. If you are home on Sunday nights watch it, if not set your DVR. It is one of the most, if not the most historical reality show History Channel offers. Oh, and it has guys hitting each other with lances!

Did you see the show? Tell us what you think in the comments below.