World Without End:
A paid assassin is sent to murder a king. A mysterious knight flees to the countryside, hotly pursued by the Queen’s men. Two teenagers witness an incident in the woods that will change the course of a nation.

In the thriving town of Kingsbridge, the latest marketplace gossip is the strange circumstances of the King’s death. The civil war is over, Kingsbridge’s economy is robust and merchant coffers are full.

All is well in Kingsbridge until the two noble young men bring their wounded knight to the Priory to be doctored. Sir Thomas Langley surprises all by buying his sanctuary in the Church as a humble monk using a dowry from the Queen. What could he possibly have on Queen Isabella to warrant such support?

Without warning, Kingsbridge seems suddenly under siege. The Queen’s ardent supporter, Sir Roland, marches in and usurps the Earldom of neighboring Shiring, condemning the reigning lord to death as a traitor. Roland’s list of men, who supported the old King against Her Majesty is long – and they will all hang. The rest must pay dearly in taxes to support her claim to the French Crown – marking the beginning of the 100 Year War.

Caris, a visionary young woman, struggles to rise above the suffering and oppression in order to lead her people out of the dark times. In order to save Kingsbridge, Caris, along with her lover Merthin and Thomas Langley, build a community that stands up to The Crown and The Church. Their courage inspires a nation and throughout Europe commoners and peasants stand up for their rights and revolt against their oppressors – a new age emerges.

First quick episode breakdown as it is different in the United States from other countries. World Without End is an 8 episode miniseries. Here in the States we get two episodes a week, so Part 1 is actually episode 1 and 2, part 2 is episode 3 and 4 and so on. This review covers Part 1, which if you are reading this from Canada or the UK is episode 1 and 2.

World Without End opens on a battlefield in 1327. King Edward II is defeated and abdicates to his wife, Queen Isabella, who turns to her son and crowns him King Edward III. 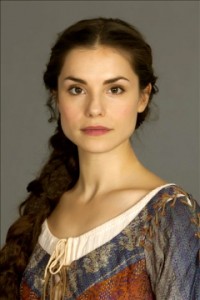 We are then taken to Kingsbridge where we meet the main cast of characters, the nasty Petranilla played by Cynthia Nixon, the not so pious Godwyn played by Rupert Evans, Merthin, a descendant of Jack Builder and Lady Aliena, played by Tom Weston-Jones, his brother Ralph played by Oliver Jackson-Cohen, Gwenda played by Nora von Waldstätten, and the feisty Caris played by the lovely Charlotte Riley. There are some changes from the book that we will get to in a while, for now let’s focus on the show itself. I have one issue that has nothing to do with the show or the Reelz channel, it’s a hit on DirecTV. They seem to be the only provider that doesn’t carry the Reelz channel in HD! So my viewing pleasure wasn’t what it could have been. Having said that the visual appeal was excellent. There’s a great aerial shot of Kingsbridge that shows the cathedral and surrounding town. Even without HD the scenery and visuals are great, I’ll have to wait for the Blu-Ray to enjoy the full HD-ness.

Now the show, I thought the first hour/episode was a little weak. It was slow to start and didn’t really grab my attention. There was a lot of character introduction but not enough to get invested in the characters. Caris is the exception to the last sentence. She was given the screen time to capture your attention and get to know her character and her plight. Everyone else seemed thrown into the mix and will be explained later. The worst was Gwenda, she just seemed to appear in Kingsbridge one night. I know what you’re thinking, Gwenda, appears in Kingsbridge, but she is from kingsbridge! In the book she is, but not in the miniseries. We’ll cover those differences in a minute.

The second hour/episode was much better. The characters were better developed and more three-dimensional. The trial scene was emotional and the final bridge scene was equal parts intense, chaotic, and tragic. The body swinging over the side of the bridge from the gallows, neck clenched and feet kicking, trying to find solid ground was a bit disturbing and a fine bit of acting. Throughout the scene the true nature, good or bad, of each character was revealed.

If you read the book and watched the show you were probably yelling at your TV. There are a few differences/changes from the book to the miniseries. Without giving away to many spoilers I will say that the book opens in 1327 with Caris, Merthin, Ralph and Gwenda as children in kingsbridge then jumps ahead 10 years. The miniseries shows them in 1327 as adults. The problem is, as kids they witness something that binds them together forever. This point is lost completely in the miniseries and is kind of pivotal to the entire plot. Also in the book the cathedral plays an important role at the beginning which seems to have been left out of the miniseries as well. We will have to see how it all plays out and see if the changes hurt the miniseries.

If you haven’t read the book I would advise waiting until after the miniseries. There are enough differences that might confuse you. But the overall story arc seems to be intact.

Unlike Pillars of the Earth there isn’t a lot of history to nitpick most of the story and characters are fictional. But there are some historical points we can pick out. The show opens in 1327 with Edward II abdicating to Isabella and Isabella turning to crown her son Edward III. It didn’t happen quite like that. Edward II was captured and imprisoned in November 1326. Queen Isabella and Roger Mortimer spent the next three months trying to get rid of the king. They were finally able to convince Parliament to remove the King in January 1327. At the trial Edward II was given a choice to abdicate the throne in favor of his son, Edward of Windsor or to a non-royal. Edward II choose his son and on 24 January 1327 he officially abdicated the throne and 14 year old Edward III was installed.

Later in the show we see Edward III arrest and execute Mortimer for the death of his father, Edward II. That part is almost correct, at the age of 18 Edward III arrested Mortimer in October 1330 and executed him in November 1330. Where the miniseries gets it wrong is the timeline. During the miniseries the date is flashed 3 times and each time the year is always 1327. They are off on those events by about 3 years.

They glossed over the reign of Isabella and Mortimer and jumped right to the reign of Edward III. That holds with the book which opens in 1327 and jumps to 1337 pretty quick.

Overall World Without End is a good miniseries. And for medievalists it fills a gap in TV which is seriously lacking good medieval programs. If you liked Pillars of the Earth, Game of Thrones, or the short lived Camelot you will enjoy World Without End. Check out the trailer below and then find it on the Reelz channel (Dish Channel 299, DirecTV channel 238)