The Vikings Podcast #101: A Podcast is Coming 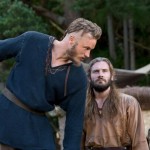 Welcome to the premiere episode of the Vikings Podcast! I’ve put together a brief episode to introduce the actors and the characters they play. There are a few sound clips from the show and the show format is discussed.

Vikings premieres on 03 March 2013 on The History Channel USA & Canada.

Find the podcast on iTunes: https://itunes.apple.com/us/podcast/the-vikings-podcast/id611038251?mt=2

The adventures of Ragnar Lothbrok the greatest hero of his age. The series tells the sagas of Ragnar’s band of Viking brothers and his family, as he rises to become King of the Viking tribes. As well as being a fearless warrior, Ragnar embodies the Norse traditions of devotion to the gods, legend has it that he was a direct descendant of Odin, the god of war and warriors’

Download the MP3 and listen to it on your favorite MP3 player. Subscribe to the feed so you never miss a single episode.

3 comments on “The Vikings Podcast #101: A Podcast is Coming”