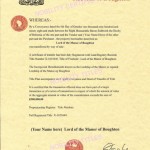 Today we have a review of the book Buying Manorial Titles in England: a simple guide to the pitfalls by David Maximilian Cathmoir Nicoll. The book is described as a short guide to “educated layman to ensure they understand the key issues in current English law regarding their ownership rights”. Being from the States I didn’t even know you could buy titles of Nobility. Or that it was so wide spread!

Buying Manorial Titles begins with a history of the rights of land and the concept of a manor. It also details what a ‘Lord of the Manor’ is and what rights they are entitled. Following the history it gets into the legality of buying and selling titles.

Did you know it is illegal to buy a title of nobility? I didn’t. And I never would have thought of buying one. Author David Nicoll highlights numerous cases of people trying to buy and sell titles. In fact it was so rampent there Parliament enacted the Honours Act of 1925 to make buying and selling titles illegal. But in over 85 years only one person has ever been convicted under the Act.

Buying Manorial Titles also outlines what deeds are needed to provide proper proof of a title. There is also a section on the different and erroneous ways some have tried to register their deeds.

David Nicoll lays out the history and facts about Manorial Law in an easy to read and, more importantly, easy to understand fashion. At times the book can get a little heavy citing different laws and court cases. But overall it is a good read.

Buying Manorial Titles is well written, enjoyable to read and I learned quite a bit from it. At less than 100 pages it is well worth your time to read it. After reading the book I did a little internet research on buying a title. And it seems to me it is about as legit as naming a star after someone, or buying an acre of land on the moon. You shill out a lot of money and you get a fancy piece of paper which holds no value.

Medieval Archives gives Buying Manorial Titles in England: a simple guide to the pitfalls 3.5 out of 5 stars.

Disclaimer: Medieval Archives received a complimentary copy of Buying Manorial Titles in England: a simple guide to the pitfalls for review purposes

Pick up your copy now on Lulu.com: http://www.lulu.com/shop/david-nicoll/buying-manorial-titles-in-england-a-simple-guide-to-the-pitfalls/paperback/product-20683171.html
About the Author

As someone with Aspergers Syndrome, David takes an obsessive interest in the intricacies of Manorial Law, and can’t understand why there are so many people in the ‘market’ who get away with selling a pile of worthless paper. This book is his attempt to help the general public protect themselves againstthe smooth-talkers who are less than honest about what they are actually selling.