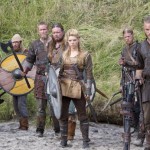 Earl Haradlson raids Ragnar’s village and Ragnar escapes certain death. Athelstan learns about the Norse gods and Rollo tries to ally himself with the Earl.

We’ll review and recap episode 5: Raid”. Then we’ll look at the history presented in the show and see how it compares to actual history.

Earl Haraldson takes precautionary measures when a seer tells him that Ragnar wants him dead. Ragnar narrowly escapes an attack on his home and must search for a way to regain his freedom.

Watch it now in iTunes:


Listen to the episode now

Get your free audio book from Audible at: http://www.thevikingspodcast.com/Audible

In this episode’s history lesson we discuss:

Copyright © 2013 · Dragon Moon Media
All Rights are Reserved. No Infringement is Intended.
The Vikings Podcast is a Medieval Archives & Dragon Moon Media production. Medieval Archives’ use of any and all copyrighted material is only for parody, news analysis, critique, and/or for educational purposes as provided within United States Code (USC) Title 17 aka “Fair Use”.