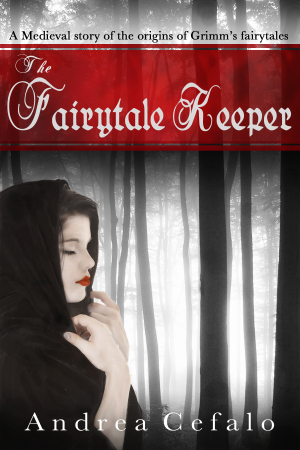 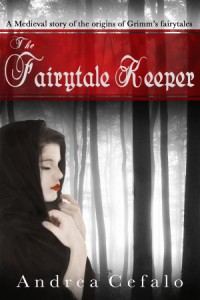 What if all the fairy tales we know and love came from one 15-year-old medieval girl? That is the premise of Andrea Cefalo’s novel, The Fairytale Keeper.

Today on the Medieval Archives Podcast we talk to Andrea about her books, how she came up with the idea and her love of the middle ages. We also discuss her second book in the series The Fairest of Them All and the Kickstarter campaign she started for the book.

Adelaide’s mother, Katrina, was the finest storyteller in all of Airsbach, a borough in the great city of Cologne, but she left one story untold, that of her daughter, that of Snow White. Snow White was a pet name Adelaide’s mother had given her. It was a name Adelaide hated, until now. Now, she would give anything to hear her mother say it once more.

A rampant fever claimed Adelaide’s mother just like a thousand others in Cologne where the people die without last rites and the dead are dumped in a vast pit outside the city walls. In an effort to save Katrina’s soul, Adelaide’s father obtains a secret funeral for his wife by bribing the parish priest, Father Soren.

Soren commits an unforgivable atrocity, pushing Adelaide toward vengeance. When Adelaide realizes that the corruption in Cologne reaches far beyond Soren, the cost of settling scores quickly escalates. Avenging the mother she lost may cost Adelaide everything she has left: her father, her friends, her first love, and maybe even her life.

Seamlessly weaving historical events and Grimm’s fairy tales into a tale of corruption and devotion, The Fairytale Keeper, leaves the reader wondering where fact ends and fiction begins. The novel paints Medieval Cologne accurately and vividly. The story develops a set of dynamic characters, casting the famous villains, heroes, and damsels of Grimm’s fairy tales into believable medieval lives. Though historically set, The Fairytale Keeper brims with timeless themes of love, loyalty, and the struggle for justice.

Find Andrea on the internet: