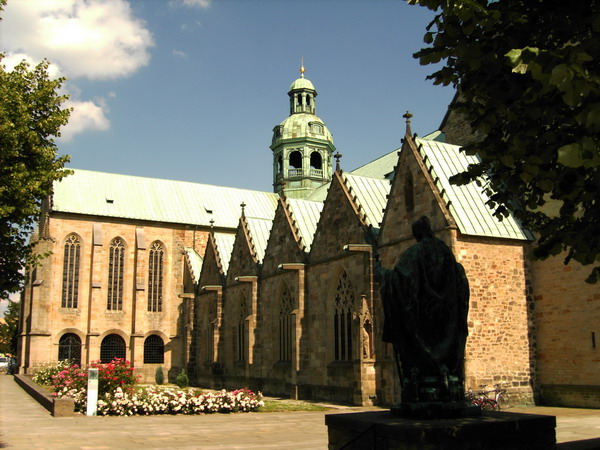 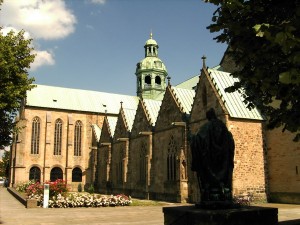 Germany’s Hildesheim Cathedral in Lower Saxony has one of the most complete surviving ensembles of ecclesiastical furnishings and treasures in Europe, including many medieval masterpieces made between about 1000 and 1250. The cathedral was designated a UNESCO world cultural heritage site in 1985. Major renovations that are currently underway provide the opportunity for Medieval Treasures from Hildesheim-an extraordinary selection of about 50 medieval church treasures, most of which have never been shown outside Europe-to travel to The Metropolitan Museum of Art, where they will be on view beginning September 17.

The exhibition is made possible by the Michel David-Weill Fund.

The exhibition is supported by an indemnity from the Federal Council on the Arts and the Humanities.

The first section of the exhibition will focus primarily on the legacy of Bishop Bernward of Hildesheim (960-1022), one of the greatest patrons of the arts in the Middle Ages. During his time, Hildesheim was a center for bronze-making and other artistic activities. In addition to the famous monumental bronze doors and the column in Hildesheim Cathedral that cannot travel, Bernward commissioned many smaller precious works of art, mostly for his Benedictine monastic foundation. These include the Golden Madonna, a silver crucifix, a pair of richly decorated silver candlesticks, and sumptuously illuminated manuscripts, all of which will be included in the exhibition. The monumental lifesize wood carving known as the Ringelheim crucifix is one of the earliest surviving three-dimensional sculptures of the Middle Ages. It will provide a focal point for the gallery, which will contain one of the most impressive groups of 11th-century works of art ever seen in North America.

The exhibition will also examine the continuing artistic production of Hildesheim in the high Middle Ages. Opulent jeweled crosses, as well as reliquaries and portable altars decorated with enamel and ivory will be featured. The late-12th-century Saint Oswald reliquary surmounted by a silver-gilt bust of the saint and decorated with finely drawn niello plaques is a highlight as are the three gilt-bronze liturgical fans with openwork decoration and cabochon stones, each over 16 inches in diameter.