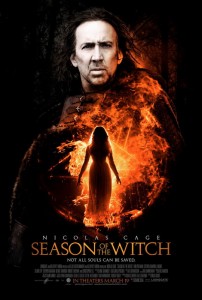 Nicolas Cage is a knight tasked with delivering a woman, believed to be a witch to a monastery. The catch, this witch may be the cause of the Black Plague! Cage seems a little uninspired throughout the movie. But really what movie does Cage seem inspired in? I can’t think of any, must be his acting style… It’s a little cheesy, a little campy, like all good horror movies.

Decide for yourself, the trailer and an extra clip is below…