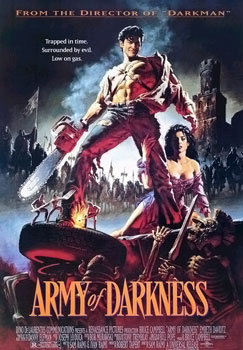 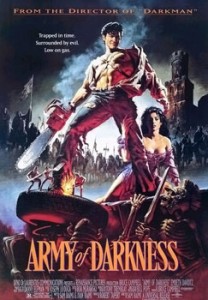 We are up to number 3 on the list of Medieval Halloween movies. If you missed the rest you can see which movie ranked #5 and who came in the #4 spot.

Today’s movie is a bit of a cult classic. It’s official title is Evil Dead 3: Army of Darkness and its more of a horror/comedy than stragiht up horror movie. Now the first movie in the trilogy, The Evil Dead, scared the 14 year old me to death. I grew up near a wooded area and after watching The Evil Dead I avoided it after dark the rest of the summer! Somewhere between the original movie and part 3, the franchise transformed from the horror genre to the horror/comedy genre.

In Army of Darkness Ash is transported back to the year 1300 and captured by Lord Arthur’s men. In order to get back to his own time Ash must find the Necronomicon Ex-Mortis. It’s your standard find-the-book-of-magic-and-recite-the-correct-spell plot line. But does he do it, or is he trapped in the Middle Ages forever?!?