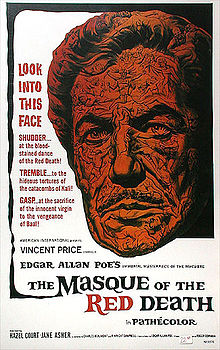 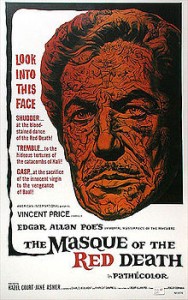 We are down to the last two movies on the list. I think yesterday’s movie received the most fanfare. Which just proves its status as a Cult Classic.

But today’s movie stars one of my all time favorite actors, Vincent Price! I love, love love, Vincent Price. As a kid I would stay up for the CBS late movie and was introduced to classics like Creature from the Black Lagoon and Theater of Blood, wich starred the late great Vincent Price.

Number 2 on our list is another Vincent Price movie, adapted from a Edgar Allen Poe short story. The Masque of the Red Death tells the story of Prince Prospero(V.Price) as he locks himself and other nobles in his castle to avoid the wicked plague crossing the land, the Red Death. And what’s a noblemen to do while the villagers die of the Plague? Why throw a masquerade ball of course! Will they survive the plague or die a horrible death?

“And Darkness and Decay and the Red Death held illimitable dominion over all.”