Christmas music from the Middle Ages 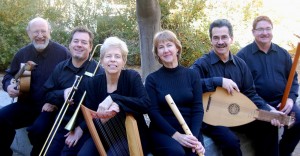 An enchanting tour through the sounds of Christmas in the Middle Ages and Renaissance. That’s what is on offer this month from Albuquerque’s resident early music ensemble Música Antigua.

One can enjoy not only the music but some surprising medieval traditions from the program notes and translations provided. This year’s theme is “Marvel Not, Joseph,” taken from a 15th-century Middle English carol of the same name, “Mervele noght, Josep,” as it was then spelled and pronounced.

Players and singers both, the members of Música Antigua invariably find gems often buried for centuries in the manuscripts of the era, many of which were used as virtual scrap paper in the bindings of books from later centuries. One such piece is the motet “De supernis sedibus” from the Worcester Fragments of late-13th-century England, a superb example of three voices exchanging melodic phrases.

The music is performed in a variety of combinations of voices and instruments from the purely a capella “Mervele noght, Josep” to the entirely instrumental “De la virgin que pario” (By the Virgin who gave birth) from Spain of the 16th century. A selection of early woodwinds combine with viols (early stringed instruments), percussion and even a sackbut (trombone). Actor Phil Bock contributes spoken selections from period literature.

If you go
WHAT: Música Antigua of Albuquerque
WHEN and WHERE: Saturday, Dec. 21 at St. Michael & All Angels Episcopal Church, 601 Montaño NW
HOW MUCH: $16 general admission, $13 seniors, $9 full-time students. For reservations call 842-9613