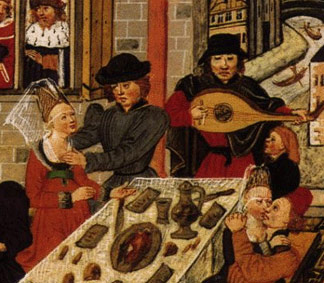 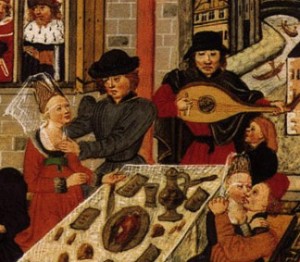 Love potions were popular in many cultures in the past and are still commonly used in regions such as Zimbabwe, where traditional healers sell their happiness-in-a-bottle for $40 to $70.

The herbs in some love potion recipes do have real physical effects related to romance—they can produce excitement, euphoria, or simply a pleasant scent that may be enchanting to the opposite sex. Some ingredients will churn your stomach, and not in that butterflies-in-your-stomach, I’m-in-love kind of way.

Here’s a look at some popular ingredients and a few old recipes.

Earthworms With Periwinkle and Leeks

A 16th century book, “The Boke of Secretes of Albertus Magnus of the Vertues of Herbes, Stones and Certaine Beastes,” suggests mixing periwinkle with leeks and earthworms; once ingested, the mixture will strengthen love between a man and his wife.
…
Bay Leaves on Night Before Valentine’s Day

In England, an old custom holds that on the eve of St. Valentine’s Day a woman should pin bay leaves to her pillow, one at each corner and one in the middle. The woman will dream of her future lover or the man she is to marry, according to lore. Retired professor D.L. Ashliman included this custom in a compilation of European superstitions for the University of Pittsburgh.
…
Spanish Flies and Blood

In 17th century France, love potions were often a combination of menstrual blood, Spanish flies, and natural herbs, such as verbena, according to a Chicago-Kent Law Review article. Many sources state that the Spanish fly was a common love-potion ingredient.