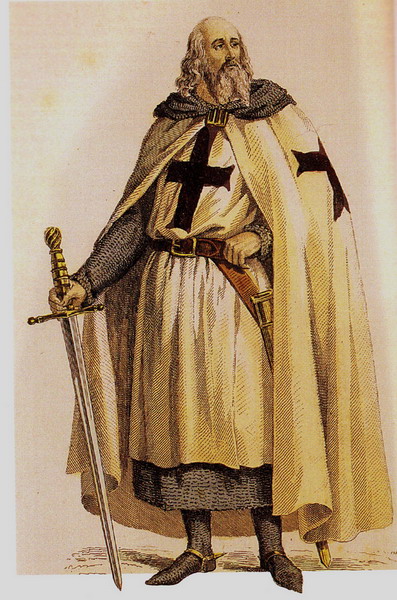 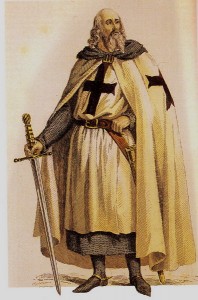 Jacques de Molay the 23rd and final Grand Master of The Poor Fellow Soldiers of Christ and the Temple of Solomon, better know as The Knights Templar.

The Knights Templar formed in 1119 and quickly rose in power and wealth. With help from the church they were able to amass a fortune in money and property. They were fierce warriors of God that set out to protect the Holy Land and Christian pilgrims.

Lead by Jacques de Molay in the late 13th Century the Knights Templar were the wealthiest institution in Europe. They revolutionized the banking industry, granting lines of credit and loaning money to the Nobles and Kings of Europe.

King Philip IV of France, with the help of Pope Clement V, plotted to dissolve the Templar Order, seize their treasure and rule a new Order of Knights. On Friday the 13th, October 1307 King Philip arrested Jacques de Molay and thousands of Knights Templar all across France. The Knights were tortured until they confessed heresy. Jacques de Molay recanted his confession and Pope Clement V ordered his execution along with senior members of the Knights Templar.

On 18 March 1314, 700 years ago this month, Jacques de Molay was burned at the stake for heresy and devil worship, with his last breath he placed a curse on King Philip and Pope Clement. After the death of de Molay the Knights disbanded and their fleet of ships disappeared along with all their treasure.

In this lesson we will examine the life and death of Jacques de Molay, the Origin of the Knights Templar, the treasures they held and the conspiracy theories that surround them.

The music was provided by Tim Rayburn. It is available at Magnatune.com
Sound clips from National Geographic Channel and The Da Vinci Code

2 comments on “MAP#51: Jacques de Molay and The Knights Templar”