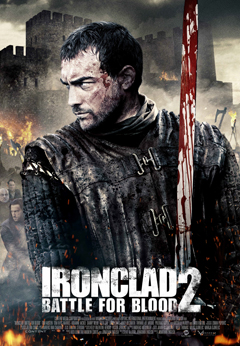 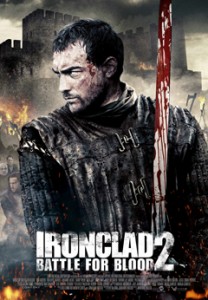 Ironclad II: Battle for Blood is the sequel to 2011’s Ironclad.

For the US Ironclad: Battle for Blood is available on Video on Demand(VOD) on 11 July or DVD on 05 August.

Watch the trailer below and pre-order your copy of Ironclad: Battle for Blood.

Brace yourselves for another brutal battle, as one of the few survivors of the Great Siege of Rochester Castle fights to protect his family’s estate from fierce Celtic raiders. With a new battleground and a new enemy, IRONCLAD: BATTLE FOR BLOOD promises to deliver the same ferocious, adrenaline-filled action and gory kills that defined IRONCLAD.

It’s 1216, just one year after the battle at Rochester Castle, and a new enemy threatens English life that’s far more terrifying than King John – bands of Celtic raiders, stealing livestock and killing anyone who gets in their way. After the death of his father at the hands of these raiders, Hubert is determined to defeat them, once and for all. He seeks out his cousin Guy, one of the heroes of Rochester castle, for help. Guy is no longer the naïve idealist he once was, but a hardened sword-for-hire… Hubert finds him in a whorehouse, drunk and disillusioned, and only willing to raise his sword for money.

They return to the castle, but before Hubert, Guy, and the rest of their band finish building up the castle defenses, the raiders strike. Bloody battles and violent deaths follow, including that of the enemy leader’s son. Arriving to find his eldest son dead, the Celtic chieftain vows he will not return home until every living thing within the castle walls is slaughtered – and that’s just the cue for more Ironclad gut-splitting action. The chieftain’s resolve only intensifies the fight, because now the Celts aren’t just fighting for livestock, they’re fighting for revenge.

IRONCLAD: BATTLE FOR BLOOD will take you on a hellacious ride featuring crashing swords, gruesome hand to hand combat, and plenty more of the ultra-violent medieval action that has distinguished this epic series.